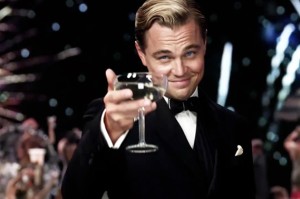 What makes “The Great Gatsby” one of the great American novels isn’t the story as much as it is the way that story is told. Years after reading it, what’s stuck with me is Fitzgerald’s prose, and the way he’s able to phrase certain ideas in such a simple yet beautiful way. The problem with making a “Gatsby” movie is that there is no real way to adapt that. We’re left just with the story, which on its own is essentially a soap opera set in the 1920’s. Of course there’s far more to it in the novel, but the film feels much simpler without Fitzgerald telling the story. “The Great Gatsby” often comes close to hitting it out of the park, but Baz Lurham too often emphasizes visual flair over emotional depth, resulting in an ambitious, interesting, but wildly uneven adaptation.

Nick Carraway (Tobey Maguire) is an aspiring bond broker who moves in to a new house on Long Island. He soon finds out about his mysterious neighbor, Jay Gatsby, who lives in a comically large mansion and hosts massive parties every single weekend that virtually all of New York attends. Despite this, nobody seems to know much about him. After finding out his cousin Daisey (Carey Mulligan) has a history with Gatsby, Nick is let into the man’s mysterious and lavish world, and is contiously surprised by what he finds.

Like Gatsby himself, director Baz Luhrmann is all about style over substance. We bounce back and forth extremely quickly from scene to scene as he plundges us into this world, full of bright colors and fantastical looking scenary as if we’re being shown another planet in a science fiction movie. At times this style works quite well, as in the party sequences. Luhrmann is able to effectively capture the insanity of these over the top parties of Gatsby’s. This is necessary, as the story is really about showing the lavishness of the man’s lifestyle, and then contrasting that with the man himself who is, in the end, quite hollow.

Yet sometimes it feels like Luhrmann is just showing off in a distracting way, like a little kid desperately trying to get our attention. The parties often go on for way too long, as if this is the only reason Luhrmann  wanted to adapt “Gatsby,” and the editing is frantic even in the non-party scenes. The first half hour is so fast paced that it feels like we’re on a rollercoaster. For an emotional drama, that isn’t a good thing. The visual effects work well when emphasizing the over the top nature of Gatsby’s lifestyle, but Luhrmann rarely knows where to draw the line, and watching what essentially amounts to a 3D car racing sequence in a “Great Gatsby” movie is just plain weird.

Speaking of weird, the soundtrack to “The Great Gatsby” is by Jay-Z, which is a sentence I never imagined myself typing. Some viewers find the decision to use modern music to be an effective and interesting one, but it didn’t work for me. We’re watching a scene which clearly is taking place in the 1920’s while at the same time listening to “100$ Bill.” To make matters worse, the choreography of many of these sequences makes it appear as if the characters are actually dancing to the modern songs. That’s not to say Luhrmann should have relied exclusively on ‘20s era jazz music (the use of “Love is Blindless” is quite effective) but tonally, some of this music is just plain distracting.

As far as adaptations go, “The Great Gatsby” is pretty faithful, changing some minor details but nothing that will make any die-hard book fans go crazy. Outside of the music and visual affects, it’s actually one of the more accurate adaptations of a book I’ve seen, and aside from adding a truly bad framing device, Luhrmann often does a great job with many of the book’s most memorable sequences. A standoff between Gatsby and Tom in a hotel room is intense and highly satisfying, as is the book’s famous ending. The emphasis on the green light is quite effective, too, and I especially loved the sound design that would kick in whenever Gatsby sees it off in the distance, just out of reach.

“The Great Gatsby” is both too much and not enough. In the opening half, Lurham smacks us over the head with lavish scenary, hip hop music and 3D effects, some of which isn’t totally necessary and often quite distracting. When he allows us to focus more on the characters the film often works, and some amazing performances by Leonardo Dicaprio and Carey Mulligan make it worthwile. But we never quite engage with the characters on an emotional level as we do in the novel because of Luhrman’s frenetic pacing and obsession with his own style. I at least admire the ambition to adapt such an important novel and to do so in an interesting and unique way, but if this film is anyone’s first exposure to “Gatsby,” I wouldn’t be surprised if they came away wondering what all the fuss is about.

One Response to Movie Review: The Great Gatsby