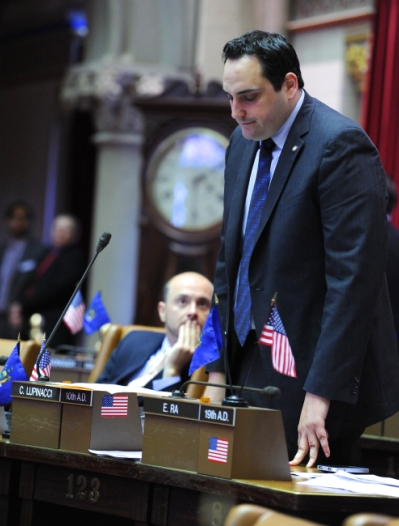 Earlier this week a group of  bi-partisan legislators honored the late Assemblyman James D. “Jim” Conte. With unanimous consent, the Assembly passed a Resolution, sponsored by Minority Leader Brian Kolb, honoring the life and service of the former Huntington assemblyman.

“Jim was not only an outstanding and noteworthy legislator but a devoted family man,” said Assemblyman Chad Lupinacci. “To me he will also be known as a mentor and friend. Most notably, I will remember Jim’s advice to me, ‘don’t sweat the small stuff.’ He was and still is a true role model for us all.”

Lupinacci was among many in the chamber to offer words of gratitude, remembrance and praise for the late legislator. Also in Albany was Debbie, Assemblyman Conte’s wife, and two of their children, Sarah and Jeff. Assemblyman Conte’s youngest daughter, Samantha was unable to make the trip.

“Jim was not only a colleague to many but a friend and mentor who helped make New York a better place for generations to come. This resolution and the fine words spoken by members from both sides of the aisle are a testament to the lasting impact Jim had on the Legislature,” concluded Lupinacci.

Assemblyman Conte served as the representative for Huntington Station for 24 years. A full video of Assemblyman Lupinacci’s speech can bee seen here. 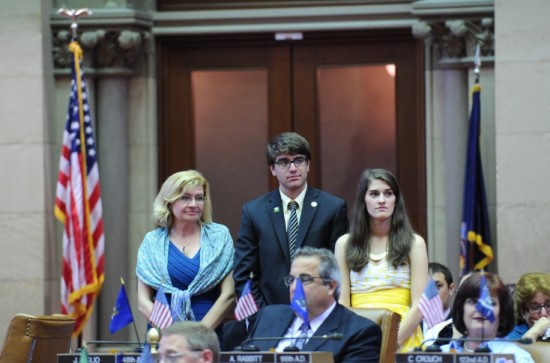 Photo above: The family of the late Assemblyman James D. “Jim” Conte looks on as the Assembly passes a resolution in his honor.