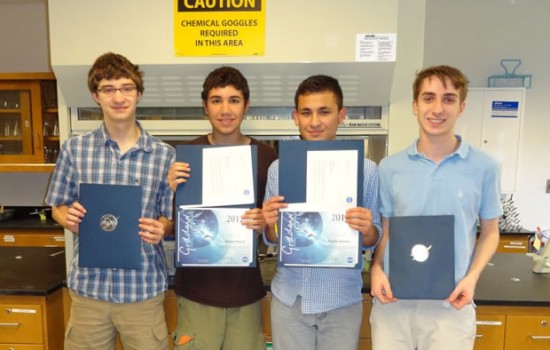 A group of four Huntington High School Advanced Placement Chemistry students turned in a fine performance in the NASA REEL Science communication contest, advancing to the finals and finishing second in the nation in their respective category, which featured the largest number of entries.

The National Aeronautics and Space Administration competition required participants to produce a two-minute video for a middle school audience that communicates one of the following science concepts: The Water of the Water Planet; Ozone in the Stratosphere; Ship Tracks and our Environment.

All four juniors conducted research for the video. Ben Nikodem and Rogelio Jimenez wrote the script. The storyboard was handled by Michael Piazza and Anthony Spinthoriakis, who also did the editing. Mr. Piazza was the narrator. “The project required plenty of research because we wanted to include as much information as we could,” Mr. Nikodem said.

“This project was a great opportunity for the students to show their creative skills and better their knowledge of their chosen subject,” Huntington AP science teacher Dame Forbes said.

Each of the teenagers was fully engaged throughout the entire video creation process. “We put it together into a script that was fit for the competition,” Mr. Piazza said. “We recorded the voice over first, which took quite a long time to get right. Afterword, we put together many different pictures, clips and animations into the form of a documentary and added the narration. It took a lot of effort from everyone to get done and we were very proud of our work.”

In accordance with the contest rules, the video was entered by posting it on You Tube, where it was viewed by a panel of judges. “After a few weeks, we were notified that we had been selected as finalists and that the video would undergo further judging,” Mrs. Forbes said. “After more time elapsed, we learned that we had come in second place nationally in our category, the largest of the three. Although it was sad that we lost, it was also fulfilling that we were able to make one of the top videos in the nation, in a large competition.”

Mrs. Forbes stated that Huntington will participate in the contest in the future. “We all had a fun time doing it, and we look forward to entering again next year,” she said.

Huntington’s video can be viewed here.