Harborfields Student to Be Published in Popular Series

June 7, 2013 8:55 am | Filed under: Around Town,Harborfields School District,News | Posted by: The Huntingtonian Staff 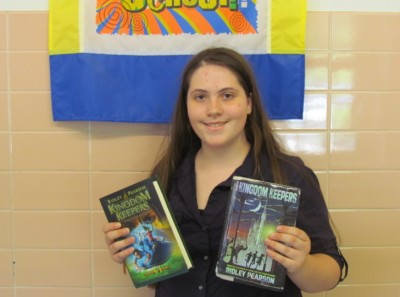 Students at Oldfield Middle School in the Harborfields Central School District had the pleasure of meeting Ridley Pearson, author of the popular “Kingdom Keepers” series. During his presentation, in which he introduced students to the six books already published in the series, Mr. Pearson extended an invitation to young adult writers to help write portions of his next book.

Recognizing an opportunity to work collaboratively with her favorite author, eighth-grader Olivia Madigan began work on her entry. Kingdom Keepers Insider, which is a free interactive fan experience for readers of the series, allows readers to follow along as Mr. Pearson writes the seventh and final book in the series. Insiders guide the direction of the story by voting on plot points, character involvement and locations — even contributing their ideas for dialogue. In addition, insiders are able to participate in writing contests judged by Mr. Pearson.

Based upon her knowledge of the series, Olivia submitted a paragraph to Mr. Pearson for possible inclusion in the next chapter of his latest book. On his website, Mr. Pearson wrote, “We received hundreds of terrific entries for the chapter six writing challenge and read them all. What a start! The writing is at a very high level. I’m excited!” Olivia’s submission was chosen by Mr. Pearson to be published.

Along with this accomplishment, Olivia also received praise from the author. “I particularly like the imagery in these paragraphs — ‘a miasma of evil’ and ‘as if they belong on an ancient gravestone,’” he stated. “The writing is crisp without being flowery; it puts you into the jungle quickly and efficiently.”

Olivia will have her Kingdom Keepers Insider username or her real name included in the print and electronic books, to be published by Disney in 2014.

Photo above right: Oldfield Middle School eighth-grader Olivia Madigan will have a paragraph published in the “Kingdom Keepers” series written by Ridley Pearson.