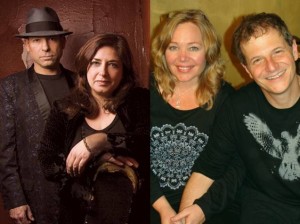 The Folk Music Society of Huntington’s monthly Hard Luck Café series at the Cinema Arts Centre on Thursday, June 20, will feature two husband-and-wife duos, The Levins and The Twangtown Paramours. The 8:30 p.m. concert will be preceded by an open mic at 7:30 p.m. Tickets are $8 for Cinema Arts Centre and FMSH members; $12 for non-members. The Cinema Arts Centre is at 423 Park Avenue in Huntington. For more information, visit www.fmsh.org or call (631) 425-2925.

The Levins are a New York-based duo who combine harmony-driven acoustic folk rock with overtones of the 1930s, a style that has been aptly likened to the Mamas and the Papas having coffee with Cole Porter. Ira and Julia Levin are singer-songwriters who perform their original material with guitar and piano accompaniment, using unexpected harmonies and unique musical arrangements that make their songs both engaging and infectious. The Levins won the 2011 Connecticut Folk Festival Songwriting Competition, were the subject of an October 2012 cover story entitled “The Levins something beyond radiance” in Acoustic Live! in New York City and Beyond, and their latest release, My Friend Hafiz, recently rose to #17 on the Folk DJ radio chart that is compiled monthly.

After meeting at an open mic in California and marrying two years later, The Levins ventured eastward and have been performing in the greater New York area as well as in Connecticut, New Jersey and Pennsylvania over the past few years. Appearances in showcases at the Northeast Regional Folk Alliance (NERFA) conference, the Huntington Folk Festival and elsewhere have brought The Levins new fans and added momentum to their mission of making the world a happier place through music.

More information and videos of The Levins may be found at
www.thelevinsmusic.com.

The Twangtown Paramours are a Nashville-based husband-and-wife Americana-folk duo comprised of lead vocalist and songwriter MaryBeth Zamer and guitarist and singer-songwriter Mike T. Lewis. Their style of music has been described as “sophisticated Americana,” blending the distinct sounds of Twangtown (a nickname for Nashville) and Austin, Texas. In the roughly three years since they united in life and in music, the Twangtown Paramours have released two albums, including 2012’s The Promise of Friday Night, which reached #2 on the Folk DJ radio chart and which WFUV’s John Platt included among his Top 10 Albums for the year…They’ve also twice been chosen as finalists in the prestigious Kerrville New Folk Competition, have been selected as formal showcase artists at regional Folk Alliance conferences, and have toured widely across the U.S.

Originally from Maryland, Zamer was a longtime fixture on the Washington, D.C. music scene and sang background vocals for the band Method Actor, featuring Eva Cassidy.  She was the People’s Choice Award winner in last year’s Wildflower! Performing Songwriter Competition. Lewis, who has lived in New York, California, and several states in between, has toured as the upright bass player with Jimmie Dale Gilmore’s band, and owns a music studio in Nashville. His songs have been covered by artists in Japan, Korea, the UK and here.

Videos of the Twangtown Paramours performing live at Nashville’s famed Bluebird Cafe can be found at
www.twangtownparamours.com/photos-and-video/ .

Now in its 44th year, the Folk Music Society of Huntington presents two monthly concert series, a monthly folk jam and sing-along, and an annual folk festival in conjunction with the Huntington Arts Council that is set for Saturday, July 20, from 12 noon into the late evening at Huntington’s Heckscher Park, Main Street (Route 25A) and Prime Avenue, in Huntington.. An afternoon of unplugged showcases and song swaps, from 12 noon to 6 p.m., featuring artists from the New York metropolitan area and beyond will precede a free evening concert on the park’s Chapin Rainbow Stage. Headlining this year’s festival will be Yonkers, NY-based Americana-roots ensemble Spuyten Duyvil, while Long Island-based singer-songwriters Marci Geller and Josh Joffen will open the evening concert at 8:30 p.m.

Photo above: Twangtown Paramours and The Levins is attached.