The Assembly unanimously passed legislation sponsored by Assemblyman Chad Lupinacci to designate a section of State Route 110 as the “Assemblyman James D.  Conte Memorial Highway.” Conte represented the Town of Huntington and surrounding areas for 24 years before his death last year. The bill received a standing ovation when it passed.

“Assemblyman Conte embodied the spirit of faithful public service, not only to his constituents, but to the state as a whole,” said Lupinacci. “Jim was not simply a boss, he was truly a friend and mentor who inspired me to go into public service. His tireless advocacy for organ and tissue donation won him great acclaim among his colleagues, and the resulting legislation has undoubtedly improved the quality of life for many New Yorkers.”

The portion of New York State Route 110 to bear his name is an ideal location, as it is at the heart of the 10th Assembly District, and is where his district office was located.

Video of the Assembly passing the legislation and Assemblyman Lupinacci speaking on the bill can be seen here. 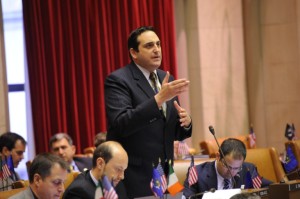 One Response to Section of State Route 110 Renamed After the Late Assemblyman James D. Conte