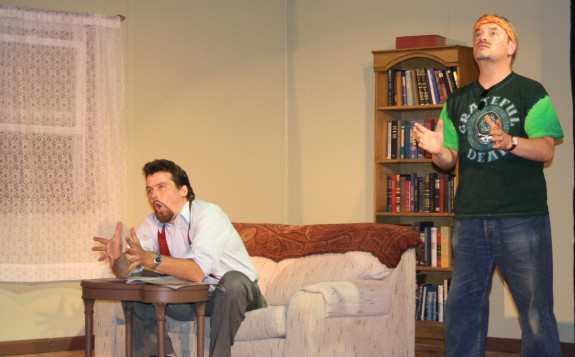 The Minstrel Players Theatre Company of Northport Village are holding their second One Act Play Festival entitled — IT HAPPENED ONE ACT – II”.  They are coming off their successful Spring staging of “The Butler Did It, Again!”.  Performances will be one weekend only on Saturday, July 27th at 8 P.M and a 3 P.M. matinee performance on Sunday, July 28th at Houghton Hall – Trinity Episcopal Church, 130 Main Street in scenic Northport Village.

The production features eight original short plays from all over the U.S.A. Contributing authors come from as far away as Hawaii and as nearby as our own backyard —- Long Island. Three authors are providing plays for the second straight year.  The eight scenes selected will be directed by four different Minstrels — Evan Donnellan, Debbie Palen, Ray Palen and Tara Palen.

·  Reading the Will – Sue Geffken Burton of Huntington, NY

·  How Nice Of You To Ask and Food For Thought – Rich Rubin of Portland, OR

The cast is made up of Minstrel regulars like Fred Amison, Roseann Baldanza, Bob Domingo, Evan Donnellan, Demi Frohn, Jeannie Gedeon, Irene Hourigan, Tricia Ieronimo, Maris Kastan, Stephanie Leinoff, Luis Ocasio, Ray and Tara Palen, Linda Randolph, Jerold Snyder along with newcomers to the Minstrel stage: Gina Haver and Michelle Torres.  The ‘World Class’ crew is rounded out with Robert Cashman – Technical Director, Debbie Palen – Assistant Director and Bernard Caprera – Lighting Director. The eight scenes that will be performed run the full gamut from comedy, drama and dramedy — with something for everyone.  The Minstrel Players are honored to feature these amazing original plays for one weekend only in the hope that they will reach a wider audience and propel these amateur playwrights to greater things!

The Minstrel Players are committed to bringing high quality, affordable theater to the Long Island Region.  Tickets are $15.00 for adults and $12.00 for Seniors and Children under 12.   For more information please call (631)732-2926 or visit the Minstrel Player’s official website at www.minstrelplayers.org .  Hope to see you at the show! 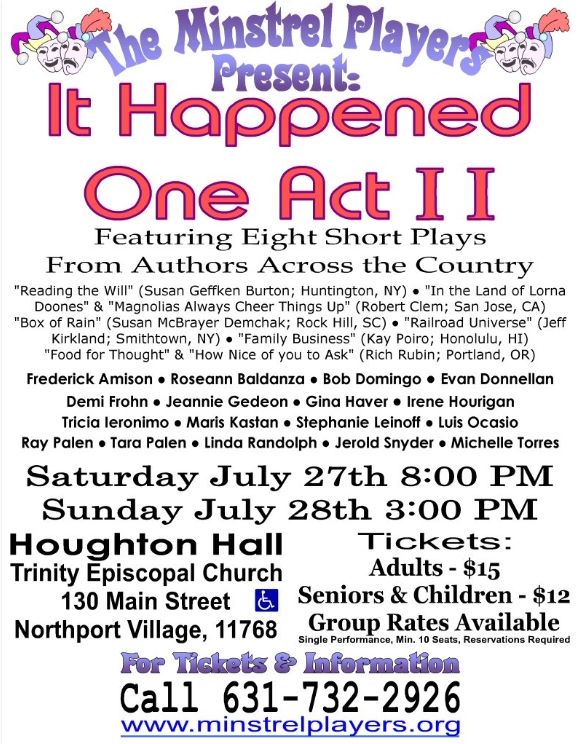