Introduced by David Filipi • Sponsored by Bob and Sandy Friedman

We’ve reached the dog days of the baseball season and the pennant races are heating up! What better way to celebrate our national pastime than with a selection of vintage newsreels that bring baseball’s rich history to life? Rare Baseball Films:The Newsreels screens on Wednesday, July 24 at 7:30 pm at Cinema Arts Centre, 423 Park Ave, Huntington 631-423-7610 www.CinemaArtsCentre.org.

$10 Members / $15 Public / Includes reception. Tickets can be purchased online, www.CinemaArtsCentre.org at the box office during theater hours or by calling Brown Paper Tickets at 1-800-838-3006. 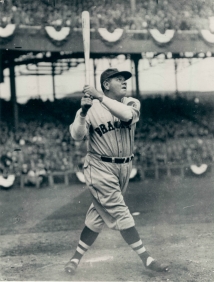 The movies have been around almost as long as professional baseball leaving us with a wonderfully rich visual history of our national pastime.  With the generous cooperation of the UCLA FILM & TELEVISION ARCHIVE, we are presenting a program from the ARCHIVE’S HEARST METROTONE NEWS COLLECTION of baseball newsreels.  This material was organized by David Filipi, director of the film/video department at OhioStateUniversity, Columbus, Ohio.

The program includes rare film footage including Stan Musial’s 3,000 hit (at Wrigley Field), Babe Ruth’s last game as a regular (1934), Jackie Robinson relaxing at home in 1956 after his final season with the Brooklyn Dodgers, Roy Campanella: Portrait of Courage (1958) and Sandy Koufax’s retirement press conference in 1966, a Hollywood charity game with Buster Keaton and Jack Benny – – plus much more (app. 120 minutes of video).

The presentation will be immediately followed by a question and answer session with Mr. Filipi and a reception in the Cinema’s Sky Room Café.

About the local sponsors:

This baseball program is sponsored by Sandy and Bob Friedman of Woodbury. Longtime CAC supporters, Sandy is a retired special education teacher at HuntingtonHigh School and CAC board member. Bob, a developer and owner of hotels and a minor league baseball team, has a significant collection of baseball memorabilia.