Movie Review: The Way Way Back 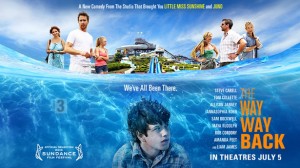 ummer is a magical time to be a kid. For adults, the time between June and August is for sitting in the hot sun, for barbecues, beaches, relaxation, all taking place during our regular lives, and between our normal, day-to-day jobs. But for kids, it’s a sort of mythical dimension that seems separated from time and space. After all, going to school is such a major part of their existence, so it’s as if these three months actually exist outside their normal lives. Naturally, it’s an opportunity for tremendous change, whether they’re looking for it or not.

Plenty of these types of movies deal with young kids who want to fundamentally reconfigure their lives over the summer. In “The Way, Way Back,” Duncan (Liam James) isn’t that kid. He isn’t pining for the summer to change himself, or to make himself happy, because he has no idea what does make him happy. He’s the kind of person who doesn’t go looking for change. It has to come find him.

In the opening scenes, Duncan sits in the (way) back of the family car as they head to their summer home for vacation. This is his position in the family: perpetually sitting in the back of the car. The rest of the family includes Duncan’s mom Pam (Toni Collete), her new boyfriend Trent (Steve Carell), who Duncan can’t stand, and Trent’s daughter Steph (Zoe Levin.)

At the summer house, Pam and Trent enjoy time with their friends, Betty (Alison Janney) and Kip (Rob Corddry), noticeably ignoring the rest of the family. Duncan feels bored and alone, which seems like a natural state for him, while occasionally striking up a conversation with a neighbor, Susanna (AnnaSophia Robb.) After wandering around town to escape his family, Duncan starts spending time at a local water park with Owen (Sam Rockwell), an employee there who offers Duncan a summer job.

“The Way, Way Back” was written and directed by Nat Faxon and Jim Rash, the Oscar-winning team behind 2011’s “The Descendants.” That was a subdued, somewhat predictable but moving film that felt incredibly honest in a way few movies do. “The Way, Way Back” has all the same qualities that made me love that film, and enough for me to keep and eye on anything Faxon and Rash do from now on. This is a humble screenplay and a humble movie, which isn’t trying to do much more than tell an insular story about a boy’s personal journey throughout his summer. But despite not aiming too high, “Way Back” accomplishes nearly everything it is aiming for.

The obvious standout of “The Way Way Back” has got to be Sam Rockwell. His character of a somewhat sarcastic, always joking yet goodhearted water park operator is, oddly enough, totally perfect for him. No, this isn’t the kind of performance that wins Oscars, but nearly every single one of Owen’s lines got a laugh in my theater, a testament both to the screenplay itself, and to pitch perfect delivery by Rockwell.

Steve Carell’s role as Duncan’s new step-dad, on the other hand, is a lot different than you would expect. On IMDb, Carell’s name is listed first, his name shows up right on top on the poster, and the commercials and trailers really try to paint this as a wacky Steve Carell comedy. And while this is a very, very funny movie, it’s interesting to note that this is a role very atypical for him. For one, from what I recall, I don’t think he’s even given a single joke, and the character is incredibly unlikable. If the movie has a villain character, it’s him. Carell does a great job with the material given, even if it isn’t as showy as Rockwell’s role, but it should be noted that if you’re going in because you love Steve Carell as a comic actor, you may end up disappointed.

I mentioned that this is a pretty simple story, and at times that simplicity can border on just being predictable. Right from the opening it’s obvious the role Sam Rockwell’s character will play, and where elements of the story with Steve Carell and Toni Collete are going. But for me, like with last week’s “Despicable Me 2,” I don’t mind if certain elements of a storyline are familiar as long as the film itself executes them in an interesting way, and “Way Back” certainly does that. This film is the biggest surprise I’ve had all year, and a serious contender for best movie of the summer.

In the end, Duncan’s journey is more than the typical “kid reinvents himself” story. Throughout the film, he is beckoned into this innocuous world of Water Whizz, and just like summer itself seems to exist outside of space and time, so does this water park for Duncan. It’s an opportunity to escape from his life at home, where he feels held down, relegated to the back seat, and incapable of change or growth. By the end, he has learned that a whole other world exists outside his insular little environment, and he now knows what does make him happy. If only every summer could be as meaningful as this one.