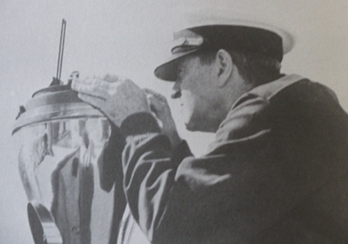 The summer of 2013 marks the 82nd anniversary of the epic voyage of the Alva — William K. Vanderbilt II’s custom-built, 264-foot yacht — on which he circumnavigated the earth. He favored lucky numbers and began the journey when he weighed anchor in Northport Bay on the seventh day of the seventh month: July 7, 1931.

In 1932, Vanderbilt privately published West Made East with the Loss of a Day, an extensive 377-page account of the eight-month journey (28,145 miles) based on his journals and illustrated with 169 professional photographs.

The Suffolk County Vanderbilt Museum is celebrating that voyage with the scheduled publication later this year of a book by Steven Gittelman, an author, historian, Vanderbilt trustee and board president for 15 years. The volume, Mr. Vanderbilt’s Photographer, chronicles the famous Alva expedition.

Gittelman details the shipboard experiences of Robert Bronner (1907-1962), the 24-year-old photographer hired to document the journey. Gittelman made use of journal entries by Vanderbilt and Bronner to create the narrative. The “Upstairs, Downstairs” story moves between the Vanderbilts and their privileged guests and the below-decks life of the crew.

Bronner later became a cinematographer and worked on numerous movies including Silk Stockings with Fred Astaire, Jailhouse Rock with Elvis Presley, and the television series Voyage to the Bottom of the Sea.

The new volume will be the third of Gittelman’s books on the Vanderbilts. With his daughter, Emily Gittelman, he just published a little-known story of one of William K. Vanderbilt II’s cousins, Alfred Gwynne Vanderbilt: The Unlikely Hero of the Lusitania (Hamilton Books, June 2013). In 2010, Gittelman published Willie K. Vanderbilt II: A Biography (McFarland & Company, Jefferson, NC, and London). He is also author of J.P. Morgan and the Transportation Kings (University Press of America, 2012), which includes the influence of Cornelius Vanderbilt and his New York Central Railroad.

William Kissam Vanderbilt II, great-grandson of the nineteenth-century railroad and shipping magnate Cornelius Vanderbilt, was a naturalist, adventurer and global explorer. He indulged his passions for the sea, faraway cultures, marine life and the natural world by exploring the world on his ocean-going yachts.

Vanderbilt first sailed around the earth in 1922 aboard his 213-foot diesel yacht Ara, a refitted French warship. (He eventually logged 135,991 miles as its captain.) His boundless curiosity took him to Africa, Asia, Latin America, the Galápagos Islands and the South Pacific, where he collected thousands of specimens of invertebrate and marine life and birds, as well as cultural artifacts. Working with scientists from the American Museum of Natural History, he published his oceanic research and details of his specimens — some of them new discoveries — in a series of Bulletins of the Vanderbilt Marine Museum (1930-1938).

After returning from the 1922 voyage, Vanderbilt created his own private marine museum at his waterfront Eagle’s Nest estate in Centerport and called it The Hall of Fishes. Later that year, he opened the hall to the public on Wednesday afternoons, with tours led by the artist and curator William Belanske, who accompanied Vanderbilt on his voyages. Vanderbilt’s marine museum — which by 1937 was open several days a week — remains one of the most extensive, privately assembled collections of sea life in the world.

As a boy and young man, Vanderbilt, known to his family and friends as Willie, grew up sailing the oceans on his father’s yachts. Those experiences and a young lifetime of piloting a succession of ever-larger boats prepared him to command the Ara and later the Alva on their trips around the world.

Willie’s first major boat was a gift during his freshman year at Harvard in 1898. His family bought him the Carmita, a 70-foot sloop, which he sailed in New England waters. After selling it in 1900 he bought the 106-foot Virginia, and in 1902 the 152-foot Tarantula I, a former British Navy torpedo boat. Vanderbilt acquired the Tarantula II in 1913 and, as he wrote, “during the first seven months of the World War, I was performing sea duty in command of her.” After the war, he bought the schooner Genesee, the steam yacht Eagle and then the Ara.

In 1918, he earned a master’s certificate that gave him “the right to be master of yachts on all oceans and steamers of any tonnage” on the Atlantic coast, the Gulf of Mexico, the Pacific and the West Indies. In 1927, following his voyage on the Ara and years of advanced navigation study in New York, Vanderbilt earned additional endorsements on his certificate for “all oceans and unlimited tonnage.” He also held the rank of lieutenant commander in the U.S. Navy Reserve.

In March of 1931, nine years after the journey of the Ara, Vanderbilt and his wife, Rosamund, traveled to the Krupp-Germaniawerft shipyard in Kiel, Germany, to take command of their new yacht Alva, named for his mother.

“The trial runs have been successful,” he wrote in West Made East.” The ship has been transferred to American registry; the ensign floats on the breeze; the crew of forty-eight men is on board; bunkers are filled; stores and provisions lie in their shelves. Alva is ready to leave on her maiden voyage.”

On March 5, the Vanderbilts and their crew left Europe on the first voyage of the Alva, a preparatory trip for their longer sail around the planet. The first leg was to Miami, then other stops in the United States, a trip of 8,628 miles. In his journal, Vanderbilt wrote, “She is ready to undertake a long voyage, in which West becomes East, with the loss of a day.”