August 16, 2013 6:02 am | Filed under: Around Town,Huntington Station,Politics | Posted by: The Huntingtonian

Rich Hall is a straight forward, shoot from the hip guy who really cares about working class people and the Huntington Station community where he has lived all his life.

I asked him to meet with me so I could learn more about why he and his wife have decided to primary Mark Cuthbertson and Frank Petrone for the Working Families line. 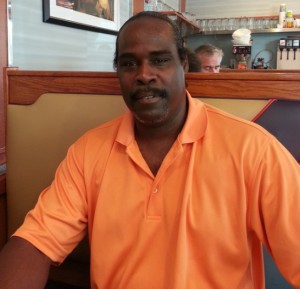 Rich explained that for a variety of reasons, the Black community has been reluctant to vote against Democrats.  “Voting for Republicans feels taboo to many of them”, he explained.  He continued, “Frank Petrone, and Mark Cuthbertson have counted on that for re-election and despite the fact that they have been so obvious in their discrimination against the working class and minority communities, especially Huntington Station, they still count on their vote and for the most part they are not disappointed”.  Rich wants to make sure that pattern changes this time around.  Rich continued, “I’m sure when Frank switched parties years ago and became a Democrat that was part of his thought process”.  Rich believes that Petrone would not have gotten away with his obvious abuse of Huntington Station if he was still a Republican.

Rich Hall, who is known as Peewee in the community, has been a very active member of the Working Families party in Huntington.  He has recruited many new members.  He stated to me that his recruitment efforts have nearly doubled the parties membership.

For reasons one can only guess, the Working Families Party has endorsed Frank Petrone and Mark Cuthbertson for re-election.  They are also supporting Tracey Edwards. I asked Rich how he felt about the party’s choices.  He feels that Tracey Edwards is a great choice but continued on to say that there are countless reasons Petrone and Cuthbertson should not have been given the nominations.

Earlier this year, Petrone voted for a raise for himself and at the same time voted for pay cuts for the town workers including forcing the unions to pay 10% more for their medical. According to Hall, this really irked the Town’s Blue Collar Union 342.  “These guys are struggling to put food on the table, but that didn’t stop Petrone from cutting their income and at the same time giving himself a raise.”

Hall continued, “Cuthbertson has the nerve to ask for support from the minority community after he voted to take funding away from our kids.”  He was referring to last year when Petrone and Cuthbertson were threatening to take away funding from Various Youth services.  Petrone changed his vote after he learned that Cook, Mayoka and Berland would be supporting the funding.  Cuthbertson sill voted no.  At the time, there was speculation that Cuthbertson was vying for the Conservative line and since he felt the Democratic and Working Families lines was his for the taking, “he didn’t worry about  honoring the wishes of this community”, said Hall.

I asked Rich what message he wanted to get out to the community.  To that he responded, “First and foremost, I want to send the message to the Black community, Don’t sell yourselves short.  Don’t vote for Mark Cuthbertson or Frank Petrone, whether it be on September 10th Primary Day or on Election Day, November 5th”.

“For a long time I had a hard time working against them, just because they were democrats.  I always had a strong loyalty to the democratic party.  There was something in me that just would not allow me to vote against them”,  explained Hall.

He continued, “For more than a decade, Petrone and Cuthbertson have been telling me what they are going to do for Huntington Station.”  Does Petrone really think we believe that he needs more time to get things done? He’s already had 20 years.”

“I helped them get elected in the past because I really believed and hope they would keep their promise to do right by my community.  After letting us down time and time again, breaking promises, they still don’t hesitate to ask for favors”.  He gave me an example of a time in 2010, before the 2011 elections when Petrone called and asked him to meet at a Diner.  At the meeting, Petrone asked Hall to support Glenda Jackson one more time.  Hall says he remembered feeling insulted that Petrone was even asking this knowing Glenda did not stand up for the community she promised to represent.  “I remember thinking to myself, he assumes just because I’m Black I am going to support her again.” Halls response was, “My community doesn’t have a second chance.”

“Time and time again, I still held out hope that they (Petrone, Cuthbertson and Berland) would do the right thing.  Now, I’m convinced they have long forgotten about Huntington Station and they don’t believe in or care about  the Black community.”  he continued, “They don’t believe that our community is as worthy as other areas.  They don’t believe that our kids matter as much as others.” I’ve tried to explain to them, over and over, even if you’ve chosen not to care about us, for the town to be successful, you need to take care of all communities.”

Hall is outraged by Petrone’s recent claims in the press boasting  that he has spent more than $13 million in the past few years in Huntington Station.  “On what!” he exclaimed, “Brickwork in front of a Pawn Shop”? Rich continued, “I’m not sure that I have a chance to win, but I’ll tell you I can do a better job of spending $13 million than they did”.

Rich is very passionate about a lot of things but he showed the most emotion on two topics; about the kids in his community, and how he feels about Rev. Jerry Artis, who is a leader in the Huntington Station community.

He would like to see more recreation for the kids in Huntington Station including a community center and a pool. He explained, “something to make them feel worthy and a safe place for them to hang out”.  He noted that Movies on the law sponsored by Cuthbertson are held in most areas of the town except Huntington Station.

He discussed the pressure that was put on Rev. Artis when he spoke out against the democrats who he believed were not doing the right thing by the people in his community.  He has tremendous admiration for Rev. Artis because he never let the pressure get to him and he was speaking out long before others had the courage to join him.

He spoke about the lack of code enforcement.  “They don’t enforce the laws on the books.” That would solve a lot of the problems.

He was especially annoyed by the rumors he is hearing that Mark Cuthbertson is encouraging people to bullet vote for him and forget about Tracy Edwards. “To them this is a game, to us it is the future of our community and the people who live there”.

He explained that he is confident that he and Tracey Edwards will win the Working Families primary. “Frank and Mark’s $700,000 war chest can’t turn this community against us.  People around here know the deal and they are going to get out and vote.”

He ended our meeting by restating what he had said earlier, “I want to send the message to Huntington Station and particularly the Black community, no matter what happens don’t sell yourselves out any longer.  Don’t vote for Mark Cuthbertson or Frank Petrone.”  He wants to remind the people in his community that they are more powerful than they realize. “Petrone and Cuthbertson can’t win this election without our vote.”  He also wants to send the message to the Republicans, “If you win, and you do right by the Huntington Station community, you will not lose an election for a very long time.”

Rich will be holding several .99 cent fundraisers that will include food and a D.J.  He is holding the events because he wants people in the community and Working Family Party to feel empowered, motivated and ready to stand together .

At the end of our nearly two hour interview, Mr. Hall asked me, “How much of what I said is your editor going to let you print?”  To which, I smiled and said, “I am the editor.”