Centerport volunteer firefighter Ken Klerk was recently recognized for his 65 years of outstanding and dedicated service with the Centerport Fire Department. Klerk joined the department in 1948 and later climbed the officer’s ranks, starting as Lieutenant and Captain of Engine Company No. 1, Second Assistant Chief, First Assistant Chief, and then served as Chief of the Department from 1968-1969. Klerk spent the next 20 years, from 1970-1990, as member of the Board of Fire Commissioners.

Klerk served over 25 years on the Centerport Rescue Squad, and was one of the first EMT’s in the Town of Huntington. When Klerk joined in 1948, Centerport was the only fire department in Huntington with an ambulance at the time.  The white Ford ambulance and First Aid equipment were donated by William K. Vanderbilt in 1938, and handled many calls for assistance throughout the town.

Klerk noted that in the early days the department responded to many brush fires, and the law to ban open outdoor burning was passed while he was Chief which helped curb the fires.  He remembers a tragic house fire in Centerport that claimed the lives of three children in the early 1960’s. That prompted him to install smoke alarms in his own home, which were just coming on to the market.

A lifelong resident of Centerport, Klerk owned a television sales and service business in Greenlawn. At 84-years of age, Klerk is still an active member of the department’s Fire Police Squad, controlling traffic and safeguarding the public and emergency responders at fires and accident scenes. 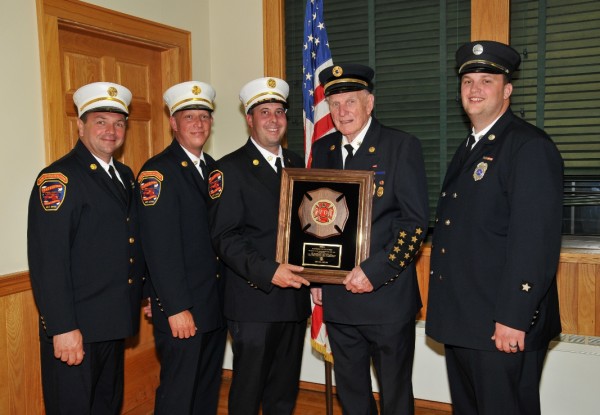