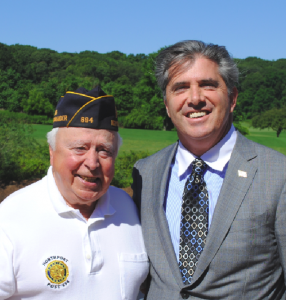 award in recognition for his dedication to the Veterans’ community. Councilman Cook will receive the award on Tuesday, September 3rd at 6PM at Madison Steakhouse, 670 Motor Parkway, Hauppauge, NY. Veterans are invited to attend the dinner and award presentation at no cost.

Councilman Cook is being recognized for his charitable efforts, which restored a pothole-covered parking lot at the Northport VA Medical Center. The parking lot, which had been in disrepair for years, had been a source of frustration for local Veterans.

After years of Huntington Town Hall telling the Veterans that there was no funding and no solution to the pothole issue, local Vets took a chance contacting newly elected Huntington Councilman Eugene Cook. With a “Can-Do” spirit, Councilman Cook jumped in his truck and visited the VA Hospital’s parking lot with several Veterans to inspect the parking lot.

Cook confirmed the lot’s poor quality and that there were no Town funds to help. Determined to help, Councilman Eugene Cook committed to repairing the parking lot, at his own cost.   In addition to being a Town Councilman, Eugene Cook owns an asphalt company and donated his equipment to get the job done.

“These heroes have fought for America,” said Councilman Eugene Cook. “The least I could do in return is fight against some government red tape.”

Veterans are invited to attend the dinner and award presentation at no cost. RSVP’s are required and should be directed to John Fox, VFW National Deputy Chief of Staff 631.261.5879 or loneaok34@hotmail.com