Historically, horror sequels tend to be incredibly unnecessary, with storylines created out of thin air only after the original is a hit. This is hardly a new phenomenon; it’s been the case for decades. Watching the original “Friday the 13th,” for example, it’s quite clear that a sequel wasn’t intended. After all, Jason Vorhees doesn’t even appear until the very end. Recently, the “Paranormal Activity” franchise, though a lot of fun, suffers from being a series invented out of thin air after a clearly stand-alone film was a hit. 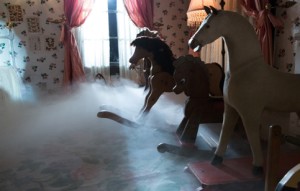 With this in mind, “Insidious Chapter 2” is a breath of fresh air in that it’s possibly one of the most necessary horror sequels ever made. It picks up literally seconds after the first one ended, and spends the following 100 minutes tying up loose ends from what we can now call Chapter 1, taking the storyline to its logical conclusion. At no point does this movie invent a new foe or introduce new characters in an attempt to somehow find a story where there is none. The central villain of “Chapter 2” is based around an unresolved storyline from the first film, and though I went in skeptical about another potential horror franchise, by the end of the first act of “Chapter 2,” I couldn’t imagine a sequel not existing.

“Insidious” divided a lot of horror fans, many of whom felt that the second half veered too far away from the creepy mystery that characterized the first. Without getting too heavy into spoilers, the last section of that film introduces a supernatural world called The Further, essentially this franchise’s explanation for the existence of ghosts and demons. It’s basically another dimension that exists parallel to ours, containing lost souls who have not passed on to the afterlife (think of purgatory, only more terrifying and with a lot of fog everywhere.)

Personally, I found The Further to be a brilliant creation, and going into “Chapter 2,” I was excited to see more of it. But in making a sequel to “Insidious,” there was one major obstacle director James Wan had to overcome. Many of the scares in the original relied on the characters, and the audience, not knowing what was happening. We see or hear something going bump in the night, and it terrifies us, relying on our instinctual fear of the unknown.

But by introducing The Further, in some way, Wan is reducing this fear. Now we know what the bump in the night was: it was a lost soul in The Further trying to communicate, or to pass through. So throughout the first act of “Chapter 2,” as James Wan gives us many of the classic, haunted house scares that we got in the original, our knowledge of The Further lessens that mystery of what could be happening. But Wan is an incredibly skilled horror director, possibly one of the most talented of this generation, and he’s able to, against all odds, overcome this.

No, “Chapter 2” isn’t quite as scary as “Chapter 1,” if only because we now know what to expect out of this series. But it’s still a bone chilling, entertaining, often funny time at the movies, and Wan does a great job recapturing much of what made the original so memorable. Believe it or not, our knowledge of The Further actually doesn’t reduce the tension that much, from my perspective. While in the first movie, we’re terrified because we don’t know what’s happening, in this movie, we’re terrified because we do.

Let me make this absolutely clear: do not see “Insidious Chapter 2” if you have not seen the first one. This isn’t a “Nightmare on Elm Street” situation, where you can basically watch any of the movies in any order and not be confused. “Chapter 2” ties into the previous installment more than most horror movies I’ve seen, reminding me a lot of the way the “Saw” franchise played around with its own chronology. In one brilliant scene, a seemingly insignificant moment from the original movie is returned to and given an explanation, and for fans of “Chapter 1,” it’s an absolutely genius “a-ha” moment. There’s a reason this is called “Insidious Chapter 2,” and not “Insidious 2.” It really does feel not like a sequel, but like a second chapter of the same movie.

At the same time, “Chapter 2” doesn’t merely repeat the exact same thing over again. While the first movie basically gave us a smorgasbord of different ghosts and demons, all with their own mysterious backstories, interacting through way of The Further, “Chapter 2” focuses in on a specific, memorable ghost from the first movie, fleshing out the back story behind it. On the one hand, it’s kind of disappointing that this movie is limited basically to one or two ghost characters, where as “Chapter 1” had so many to stick with you.

On the other hand, I’m glad this movie was willing to try something new, and though it’s incredibly heavy on the back story in certain scenes, for the most part, it manages to justify all that exposition. And speaking of trying something new, though we do get many similar “haunted house” style scares as we got during “Chapter 1,” James Wan also throws in some new elements, including an abandoned mental hospital sequence done through found footage which is a lot of fun.

The major weakness of “Chapter 2,” though, is that many of the story elements outside of The Further will be very familiar to any even somewhat casual horror fan. We get the abandoned mental hospital scares from movies like “Session 9,” family member gone crazy scares straight out of “The Shining,” and “crazy thing on a found video tape” scares from “Paranormal Activity.” Every single one of these elements are effective, but for a movie with such unique concepts like “The Further,” it also has a fair amount of “been there, done that.” Like James Wan’s other horror film of this year, “The Conjuring,” this movie is often derivative, but all of the familiar elements are still executed incredibly well.

“Insidious Chapter 2” is so much better than I thought it would be that it’s kind of astonishing. It manages to capture a similar sense of dread that Chapter 1 did, even though we now understand this world and the inherent fear of the unknown is gone. It ties itself in brilliantly to the original, at no point feeling like an unnecessary cash grab. Sure, it often strays into the realm of the cliché and has an expected amount of weak dialogue, but for any horror fans who were taken aback by how solid Chapter 1 was, I can’t imagine walking away from Chapter 2 disappointed.