1st Vice Commander and Membership Chairman Dennis Madden has been named Legionnaire of The Year 2013 by American Legion Greenlawn Post 1244, the Suffolk County American Legion and the 10th District of the Department of New York, comprising Suffolk, Nassau and Queens American Legion organizations. The multiple honors are well deserved.

He has served as 1st Vice Commander, Finance Officer and Membership Chairman since 2005. During that time, the Post’s membership has grown by nearly 250%.  In each of those eight years, the post exceeded the Department of New York’s membership goal. In addition, he has organized many of the activities and programs which have made the Greenlawn post one of the most active in the county.

Providing a great example to his fellow Post members, Dennis is known to never miss an opportunity to recruit a new member. Whether at a social event, a shopping mall or a store, he is always on the alert for a veteran-themed ball cap, a lapel pin, bumper sticker or an off-hand comment indicating a likely veteran eligible to join the American Legion.

Post Commander Bob Santo, in commending Vice Commander Madden for his success, said that “A singular dedication to this task, his hard work, imagination and a sincere belief in the mission of The American Legion have brought about Dennis’ achievements as membership chairman as a true leader in the post. 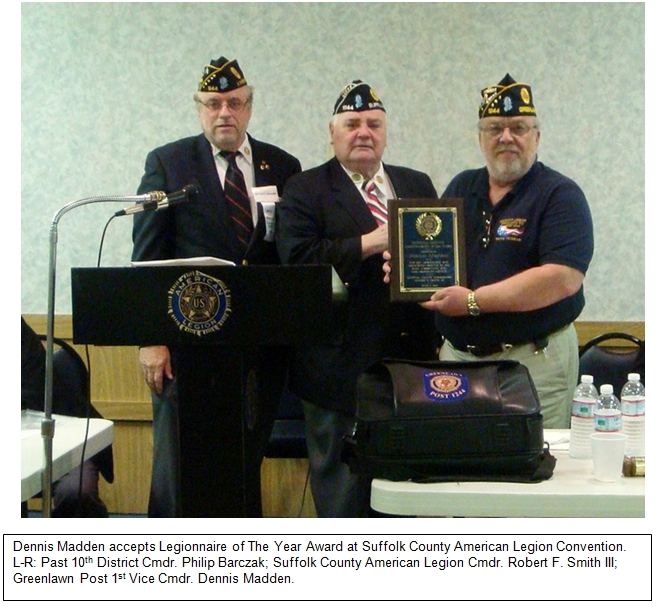