September 19, 2013 7:05 am | Filed under: Around Town,Huntington Union Free School District,News | Posted by: The Huntingtonian 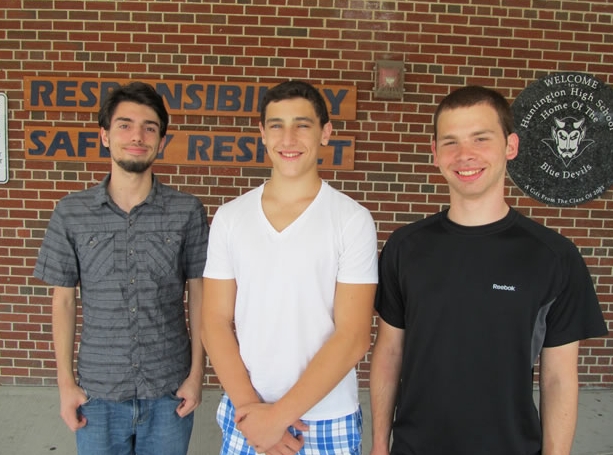 “This is a tremendous accomplishment for these fine young people,” Huntington Superintendent James W. Polansky said. “The fact that three current seniors have earned semi-finalist status further demonstrates the exceptional academic caliber of the Huntington High School Class of 2014. This is yet another proud moment for an extraordinary group.”

The 59th annual National Merit competition drew more than 1.5 million teenagers from 22,000 high schools. The students “entered the 2013 National Merit program by taking the 2012 Preliminary SAT/National Merit Scholarship Qualifying Test (PSAT/NMSQT), which served as an initial screen of program entrants,” according to the National Merit website. “The nationwide pool of semi-finalists, which represents less than one percent of U.S. high school seniors, includes the highest scoring entrants in each state.”

“All three of these students are exceptional both academically and for their relentlessness in pursuing experiences that allow them to further their talents,” Principal Carmela Leonardi said. “All three are involved in science and research. “They are enrolled in the most challenging courses we offer at Huntington High School and have participated in school programs such as peer mediation and freshman orientation. They are self-directed and excited about learning. We are very proud of their accomplishments thus far and expect to witness more of successes in the future.”

The National Merit Scholarship program, which dates to 1955, provides recognition and scholarships for top students. About 16,000 seniors advanced to the semi-final round of the competition and another 34,000 students received letters of commendation.

In addition to high scores on the PSAT/NMSQT, competitors must also meet various stringent participation requirements. They are eventually assigned a “selection index” that is based on their critical reading, math and writing skills scores.

“I am very happy to be named a semi-finalist and I’m proud that our grade was able to produce three,” Mr. Gilbert said. “Semi-finalist is a great honor and I think all three of us have good chances to advance in the competition.”

“I’m proud of being named for this honor and hope I can move forward to achieve further success with the National Merit competition and with my academics in general,” Mr. Feldeman-Stein said.

About 90 percent of all semi-finalists will be named finalists in February and 8,400 of them will win a National Merit scholarship. There is more than $35 million available for this year’s program. Some “commended” students are also later considered for special scholarships sponsored by corporations. The program is supported financially by 440 businesses and colleges.