Councilman Eugene Cook (R,C,I – Huntington) was honored recently by dozens of local Veterans for his leadership and charitable efforts 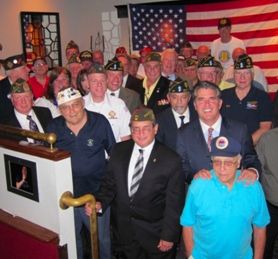 involving the repaving of a parking lot at the VA Medical Center.  The charitable work was spearheaded by Councilman Cook and supported by local Huntington businessmen, at no cost to the taxpayers.

Local Veterans recognized Councilman Cook for the coordination of several groups’ charitable efforts, which restored a pothole-covered parking lot at the Northport VA Medical Center. The parking lot, which had been in disrepair for years, had been a source of frustration for local Veterans.

“Our Nation’s Veterans answered our Country’s call to duty,”  said Councilman Eugene Cook.  “Answering their call for help to repave the Northport VA parking lot is the least we could do to show our respect and gratitude for their service.”

“If it wasn’t for the generosity of Posillico Inc., Lindley Bros Asphalt Paving Inc., and MGM Sealcoating, this would not have been possible,” said Councilman Cook to the group of almost 50 Veterans.  “When I called on our local small businessmen, they agreed that for all your patriotic sacrifices, the least we could do is give you a parking lot that would prevent an unnecessary injury that may have incurred on the gravel lot.”

“These heroes have fought for America,” said Councilman Eugene Cook. “The least I could do in return is fight against some government red tape.”