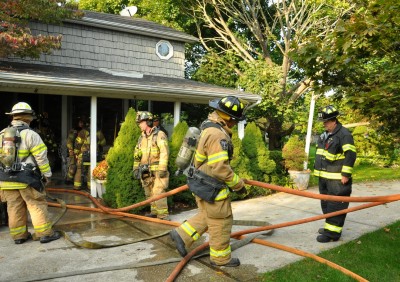 Volunteers from the Dix Hills Fire Department were dispatched to a house fire on Pine Acres Boulevard on Saturday, October 5, at about 4 p.m. Firefighters discovered a fire burning inside the walls between the basement and first floor of the home.

The homeowner had been soldering a water pipe in the basement, when the fire went into the conduit and spread up the wall. Firefighters made an aggressive interior attack and had the blaze controlled within 15 minutes, under the command of Chief Tom Magno, supported by Assistant Chiefs Rob Fling, Tom Napolitano and Alan Berkowitz.

Forty firefighters and rescue personnel responded with three engines, a ladder truck, ambulance, rehab, paramedic and first responder units. The Deer Park Fire Department assisted with an additional truck and a Rapid Intervention Team. The Greenlawn and Melville Fire Departments stood by with an engine and ambulance at Dix Hills headquarters, and handled an automatic alarm on Daly Road during the incident.

The homeowner was evaluated and treated for smoke inhalation at the scene by the Dix Hills Rescue Squad. The Town of Huntington Fire Marshal is investigating.