In a recent investigative piece on Councilman Mark Cuthbertson’s relationships with other municipalities we uncovered that he has received a whopping $956,918.65 from the North Hempstead Community Development Agency (CDA). During the same time period Mr. Cuthbertson donated about $38,000 to the “Friends of Jon Kaiman” and the “North Hempstead Democratic Committee” using funds from his “Friends of Mark Cuthbertson” campaign account among others.

People typically donate to a candidate with the thought that the candidate will use that money to execute his/her next campaign strategy.  In the case of Cuthbertson, a significant amount of the money donated to him is passed along to other elected officials and candidates in other townships. Those same townships award contracts to the Councilman’s private law firm. We have heard that after the first article on Cuthbertson was published that some of his campaign contributor’s are not pleased with the fact that it appears he uses his campaign account to drive business to his law firm.

In reviewing Cuthbertson’s North Hempstead contracts it appears that they were either awarded or renewed on 4 separate occasions including the initial award in 2004, then a contract extension in 2006 followed by a new award in 2008 and 2011 respectively. The 2011 contract expires December 2014. He charges $225 per hour for partners. In the initial 2004 award Cuthbertson also utilized the services of James Matthews for North Hempstead CDA work.  Matthews is currently the Attorney for the Huntington Ethics board, The Town of Huntington ZBA board and the attorney for the Village of Northport.

The Councilman was not shy about using his experience as a Huntington Town Board member, where he receives a salary of $76,000 plus benefits, as a reason for being qualified to be the outside legal counsel to the North Hempstead CDA. He even referenced Huntington Station Revitalization as experience. See below the attached document that was in his proposal to North Hempstead. 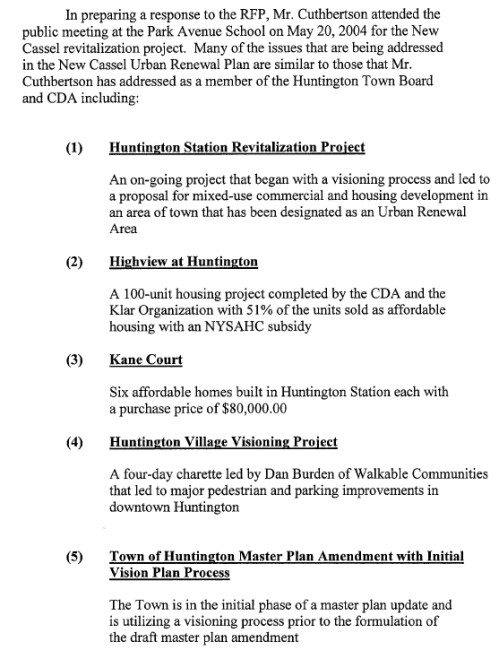 New Cassel and Huntington Station have a lot in common.  The people of New Cassel waited many years for the prospect of revitalization. Instead the residents of New Cassel endured corruption scandals, empty promises and empty storefronts. Huntington Station is still waiting, after forty years, for its rebirth as well.  Some storefronts that have moved into New Cassel include a 99 cent store, a pharmacy, and a Dentist’s office.  That office is run by a Robert Weinberg, DDS and a Vikas Arora, DDS. They have served the New Cassel community since 2010. In 2011, these two gentlemen opened up an additional office in Huntington Station known as Huntington Dental Care. An upscale, state of the art dental office was completed.  There were promises made that people in the community would receive dental services free of charge. However, shortly after the grand opening celebration, residents begin to notice that the office was rarely, if ever open. A short time later the dental office closed and all the costly equipment was ripped out.

We have inquired several times with Town Hall what happened to the Dentist’s office and the equipment.  Our requests for information have been ignored.

Renaissance Downtowns, the master developer for Huntington Station is now occupying the former dentist office. Officials from Renaissance Downtowns have told us they are paying rent to the CDA to be there and yet the entire building is tax exempt.  There are also apartments in the building that contain school aged children.  The Huntington School District is not receiving any tax funds to educate these children.

Below are photographs of the ribbon cuttings for the dentist offices in New Cassel and Huntington Station. 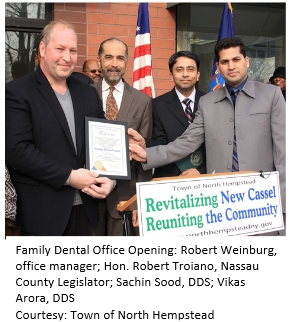 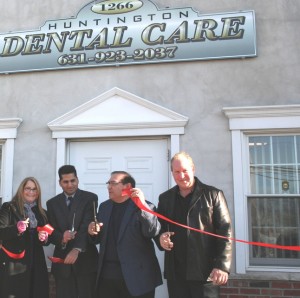