November 2, 2013 8:26 am | Filed under: Around Town,Arts & Entertainment,Commack School District | Posted by: The Huntingtonian

Commack High School is proud to announce its production of Arsenic and Old Lace, a play by the American playwright Joseph Kesselring.

It has become best known through the film adaptation starring Cary Grant and directed by Frank Capra. The play is a farcical comedy revolving around Mortimer Brewster, a drama critic who must deal with his crazy, homicidal family and local police in Brooklyn, NY, as he debates whether to go through with his recent promise to marry the woman he loves. His family includes two spinster aunts, who have taken to murdering lonely old men by poisoning them with a glass of home-made elderberry wine laced with arsenic, strychnine, and “just a pinch” of cyanide; a brother who believes he is Theodore Roosevelt and digs locks for the Panama Canal in the cellar of the Brewster home (which then serve as graves for the aunts’ victims); and a murderous brother who has received plastic surgery performed by an alcoholic accomplice, Dr. Einstein. By the end of the night you’ll be asking yourself, “They seemed like such sweet old ladies…who would have thought they would be killers?”

Performances of Arsenic and Old Lace are scheduled for Friday, November 8th and Saturday, November 9th at Commack High School. Tickets are $10 and can be purchased at the door or by calling (631) 912-2170. 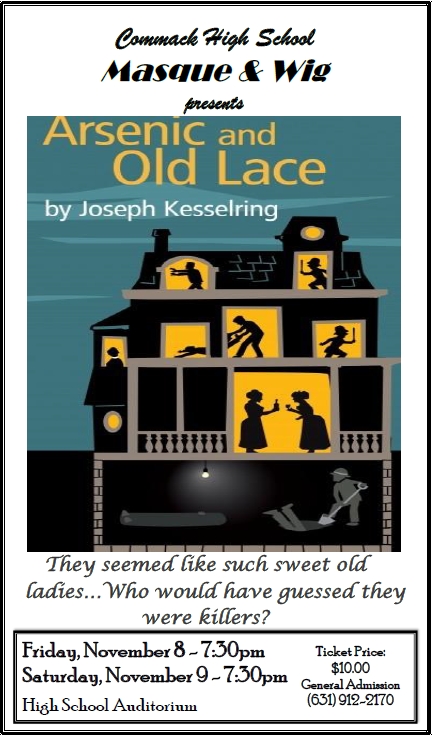