November 2, 2013 9:32 am | Filed under: Huntington Union Free School District | Posted by: The Huntingtonian

Competing in the Large School 3 division, the Huntington High School musicians and color guard members were nipped in the final standings by their West Seneca counterparts, 83.2 to 82.55. The rest of the 10-team field trailed far behind. 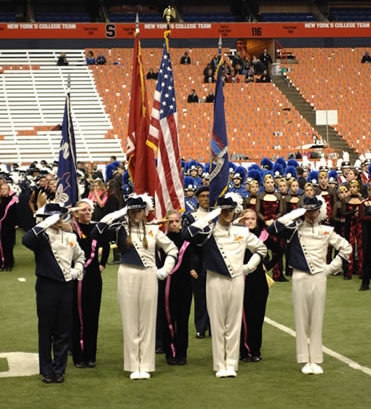 “The Blue Devil marching band has established and earned its reputation as among the finest competitive bands on Long Island and in New York State,” Huntington Superintendent James W. Polansky said. “The hours put in by members and staff starting in July is unmatched. This is clearly evidenced in every performance. The band’s success in Syracuse comes as no surprise to anyone. The entire school community is extremely proud!”

West Seneca was the sixth band in the division to perform in the Large School 3 division last Sunday afternoon. Huntington followed, beginning its performance at 2:33 p.m. in the Syracuse Carrier Dome. About 10,000 fans watched 52 bands compete in all divisions at this year’s state championships. The bands were comprised of about 5,000 members.

“This has truly been an amazing season and experience,” Mr. Giachetti said. “The band came out to do a job and did just that. They performed their hearts out and left it all on the field with no regrets. We are so extremely proud of their hard work, dedication, commitment, and pride.  This is one for the books.”

“As the announcer read off the scores and band names starting with the tenth place contestant, our hearts stopped several times,” parent Carol Goldman said. “Who knew there were so many bands whose name began with Blue? The Blue Knights from Greece, the Blue Raiders from Horseheads. But the only one that mattered was our very own Blue Devils from Huntington, who finished in second place with a score of 82.55, a mere .65 points behind West Seneca West, which returned to LS3 this year after a one year stint in LS2.”

The Blue Devil marching band is on an upward trajectory. It finished fourth in the state championships in 2011, third last year and second last weekend. Who knows what 2014 might bring?

Marching bands compete in divisions at the state championships based upon the size of the school. Each band receives a plaque with the highest scoring band in each division earned the Governor’s Cup.