Anne of Green Gables on Stage at HHS this Weekend 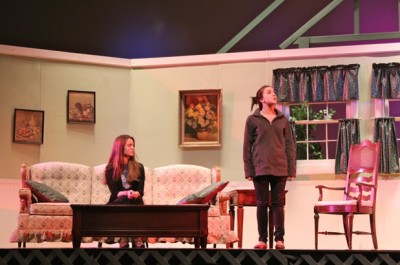 After many weeks, the time for rehearsals is finally over and the curtain is ready to rise. The Huntington High School drama club will present Anne of Green Gables this Friday and Saturday at 7:30 p.m. in the auditorium. Tickets will be available at the door.

“This has been such a great experience as my senior year drama,” said Mr. Burden who will play the part of “Ira Mills” this weekend’s show. “Even though it is such a small cast, this time around, it doesn’t feel weird and if anything it has helped this cast become so close. I couldn’t ask for a better group of people to be in this show.”

The show will be directed by drama club faculty advisor Michael Schwendemann. Kenneth Gilbert is the technical director and Ellen Fleury designed the show bill. Dana Freed is handling the set dressings and costumes, the latter along with Norcostco Costume Co. Katherine Gerdes created the show’s logo. Julie Gray, Chelsea Holmes and Bobby Marcus are the production’s student directors.

“Having the opportunity to be student director for this production gave me a new perspective on theatre and acting as a whole,” Ms. Holmes said. “This cast is a very special group of people and I am thankful to have gotten to know them so well.”

Drama club members involved in this weekend’s production have enjoyed the experience in run-up to opening night. “Being involved in this show has made me feel like I have a second family,” said Mr. McConnell, who will play the part of “Gilbert Blythe.”

“This show has been so much fun to work on, especially with such a small cast,” said Ms. Buoniello, who has been cast as “Josie Pye.” “Everyone has become so close, it’s like being with your family.”

“Anne is on to something,” Mr. Schwendemann wrote in the Director’s Notes listed in the show bill. “How many of us can say we are the same person both in private and in public? As is Anne, are we not different things to different people? Are we not different people when thrust into different situations? Are we as brave or as honest as Anne? Can we admit both to ourselves and the world that it is nearly impossible to maintain “who we are” at all times in all situations, or as Anne shows us, should we be joyful and unafraid to allow ourselves the freedom to unapologetically let all our Annes loose with no regrets?”

Tickets will be available at the door for $10. Senior citizens, staff members and students with an ID card can purchase tickets for $5. Call (631) 673-2106 for more information.