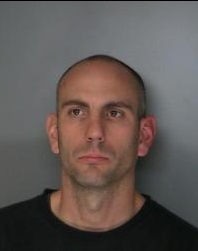 Suffolk County Police have arrested a Manorville man for a series of armed robberies that occurred throughout Suffolk County during the past two weeks.

Since October 26, gas stations in Dix Hills Calverton, Mastic, North Babylon, St. James,  and Bohemia as well as Jamba Juice in Stony Brook, Kissed by the Sun Tanning in Islip, and CVS Pharmacy in Lake Ronkonkoma were robbed by an armed suspect who demanded cash after pretending to purchase merchandise.

Utilizing video surveillance as well as tips, including information received via Crime Stoppers, Pattern Crime Unit detectives identified the suspect as Paul Tromblee. Tromblee was located by detectives on November 9 driving on Sunrise Highway in Brookhaven at 3:05 p.m.

Tromblee, 35, was charged with eight counts of Robbery 1st Degree and one count of Robbery 3rd Degree and was scheduled to be arraigned at First District Court in Central Islip on November 10.

Detectives are continuing to investigate if Tromblee is responsible for similar incidents that occurred recently.

Anyone with information about these incidents is asked to call anonymously to Crime Stoppers at 1-800-220-TIPS. All calls will remain confidential.