As Levar Butts headed into the Huntington High School football team’s Friday night dinner he said all he could think about was winning; not personal statistics or recognition. His teammates seconded the sentiment and then went out on Saturday and bested visiting Bellport, 41-12 to advance to the Suffolk Division III finals next weekend at Stony Brook University.

A crowd of 1,500 turned out to watch the Blue Devil offense explode in a scoring frenzy. While Troy Greene and Ben Kocis played starring roles there were many members of the supporting cast. “This was a team effort all the way,” said Steve Muller, Huntington’s head coach. “Everyone had a job to do and they did it well.”

Huntington (7-3) will face Sayville (6-4) for the Section XI Division III championship at Stony Brook’s LaValle Stadium on Saturday at 7 p.m. The Golden Flashes upset previously undefeated and top seeded Miller Place (9-1) in a wild game, 35-27. The Blue Devils haven’t appeared in the county finals since 2006. 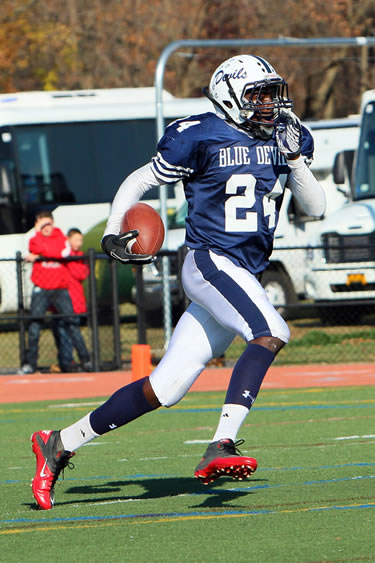 Huntington struck early last Saturday, scoring on its first possession when quarterback Ben Kocis (5-of-11 for 112 yards) found wide receiver Christian Jamison open for a 49-yard touchdown pass less than two minutes into the first quarter. The Blue Devils played an energetic, aggressive game and kept their mistakes to a minimum. The big crowd roared after long kickoff returns by Butts and Infinite Tucker. A large group of students stood and cheered throughout the contest.

Trailing 6-0, Bellport tied the score on a four-yard pass play, but then the Blue Devils took control of the game, scoring 21 unanswered points. Tucker set up the go-ahead touchdown with an 87-yard kickoff return to the Clippers’ 13 yard line. A short time later, Greene found the end zone on a one-yard plunge to put Huntington ahead, 13-6.

Butts and Greene both scored on one-run runs in the second quarter to give the Blue Devils what turned out to be an insurmountable 27-6 advantage. “I think the key to our victory was everyone playing together as one unit,” Kocis said. “We all did our jobs and clearly, whenever we can do that, it has a positive outcome. The team is totally dedicated to winning, just as we have been all season.”

Kocis (five carries for 40 yards) added a 21-yard touchdown run in the third frame and Butts (12 carries for 86 yards) closed out Huntington’s scoring with a 35-yard sprint to the end zone in the fourth quarter. Jamison caught three passes for 47 yards and had two tackles and an assist on defense to go along with an interception and pass deflection. 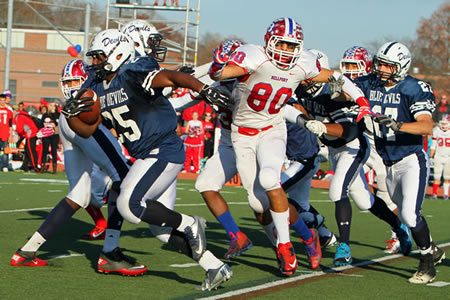 Greene finished with 17 carries for 103 yards and two touchdowns on offense and recorded 14 tackles on defense, including three for a loss. He assisted on another tackle and recovered a fumble. The teenager’s extra effort saw him grind out additional yardage on a string of rushes sometimes requiring two, three or even four Bellport defenders to bring him down. “Troy gave us everything he had,” said Steve Muller, Huntington’s head coach. “His intensity was outstanding.”

Butts, who said Friday night that he couldn’t care less about his personal stats was a force to be reckoned with on both sides of the ball. Whether it was returning kicks, rushing, blocking or tackling, he seemed to be wherever the action was during Saturday’s game. The senior finished with six tackles, two assists and a quarterback sack.

While Bellport’s passing game proved effective at times, the Blue Devils limited the Clippers to just 47 yards on the ground. “Our defense really stepped up and made some big plays,” Muller said.

The Blue Devils are expecting a fierce battle on Saturday night. Sayville defeated Huntington at Blue Devil Field during the regular season, 44-12. “Our mindset for next week is to play the efficient, smart football that we showed in today’s game,” Kocis said after Saturday’s victory over Bellport. “Our coaches always tell us that we will make mistakes, but the team who can get past those is the team that is going to win.”

The Golden Flashes have won the last three Suffolk Division III titles and are currently riding a four game winning streak. “It is a well-coached team that doesn’t make many mistakes,” Muller said. “We need to be on our game. This is what we’ve been working for all season. All of us are focused.”

Blue Devil Notes: Placekicker Justyn Tesoriero converted five of six extra points and notched two touchbacks on kickoffs . . . Huntington rushed 40 times for 265 yards and five touchdowns and compiled 377 yards of total offense . . . Anthony Puca recorded two tackles and two assists . . . Joseph Puca had five carries for 32 yards . . . Ryan Iwanicki and Keegan Reilly had one tackle apiece . . . Davonte Evans enjoyed another big game with four tackles, including two for a loss . . . Matteo McNeil assisted on a tackle and rushed once for four yards late in the game . . . Don Tesoriero had two tackles . . . Jimmie Nelson had two assists . . . The Huntington Highsteppers performed at halftime . . . The Blue Devils had 57 solo tackles, 15 assists, five tackles for a loss, six pass deflections, two forced fumbles, two interceptions, a fumble recovery and two quarterback sacks . . . The Highsteppers also made large banner and held it outstretched on the field as the Blue Devils charged through it prior to the game.