November 26, 2013 6:49 am | Filed under: Huntington Union Free School District,News | Posted by: The Huntingtonian 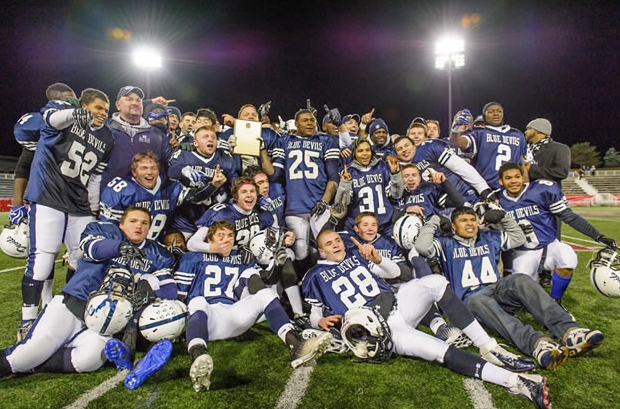 The quarterback, Ben Kocis,  engineered the Huntington football team’s comeback Saturday night as the Blue Devils rebounded from a 12-0 deficit to topple three-time defending Suffolk champion Sayville, 26-18 and capture the county crown for the first time since 2005.

Huntington found itself trailing by two touchdowns in the opening minutes of the game after a series of mishaps. A driving snow along with a howling wind and frigid temperatures made for challenging conditions but Kocis (5-of-10 passing for 119 yards) rallied his team with a series of strategic passes and runs and some sharp signal calling.

“No one panicked, especially Ben,” said Steve Muller, Huntington’s head coach. “He’s a level-headed guy who is very methodical and professional in his approach. He helped keep everyone’s focus and got us back into the game.” 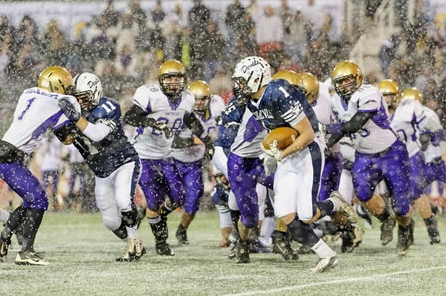 Sayville’s early success came on the heels of Huntington miscues. With the snow falling and the wind whipping, Troy Greene (17 carries for 49 yards and a touchdown) bobbled the handoff on the opening play and the ball fell from his frozen fingers. Sayville recovered the fumble on the 23 yard line and a few plays later quarterback Jack Coan (10-for 26 for 143 yards and three touchdowns) hit wide receiver Kevin Murphy with a six-yard touchdown strike.

Huntington slowly began to regain its footing until Levar Butts (19 carries for 72 yards and a touchdown) fumbled away the ball in Sayville’s territory. The turnover led to another Golden Flashes’ scoring opportunity. A short while later, Coan found wide receiver Matt Hewson open in the end zone for a 12-yard touchdown pass. Then the tide started to shift.

“When Sayville went up 12-0, I didn’t think much of it other than the fact that our team had to relax and get all of the jitters out,” said Kocis, who rushed 16 times for 80 yards and two touchdowns. “We had to put up a fight until the end and that’s exactly what we did.”

Following Sayville’s second touchdown, Tim Mattiace returned the kickoff 43 yards to get the Blue Devils rolling. Kocis then sent a missile to Butts who raced 30 yards before he was dragged down. Kocis later scored on a 1-yard plunge and Justyn Tesoriero kicked the extra point to narrow Huntington’s deficit to 12-7.

After holding the Golden Flashes on the ensuing set of downs, the Blue Devils wasted little time, despite the frigid temperature and terrible conditions. A short drive culminated in a 21-yard touchdown run by Kocis, but the point after failed. Still, Huntington had a 13-12 lead and would never trail in the game again.

The Blue Devil coaches tried to impress upon their players the need to draw Sayville away from its finesse game centering around Coan’s slick passing and talented running back Matt Selts’ acceleration and artful dodging and into the “street football” that Huntington excels at.

Trailing by a point, Sayville took to the air to try and turn things around, but Keegan Reilly came down with an interception. After Huntington was unable to gain traction, Kocis punted the ball away, but it glanced off one of the Golden Flashes and Christian Jamison was there to recover it. Kocis led the team into the red zone again and Greene scored on five yard run. Tesoriero followed with the extra point to give the Blue Devils a 20-12 halftime advantage.

A driving snow storm reared its head several times during the game, frustrating players on both teams. “The bad weather did affect the game by making the ball hard to hang on to,” Kocis said. “I think we had a mindset of running the ball with efficiency, which would eventually open up some passes for me. Obviously, it was tougher to hang on to the ball at some points throughout the game, but everyone was conscious of the conditions and played accordingly.”

The third quarter saw another miscue cost Huntington dearly. Kocis’ punt was blocked and Sayville recovered the ball on the 21 yard line. It didn’t take long for Coan to loft a 16-yard touchdown spiral to Hewson to bring the Golden Flashes to within two points (the two-point conversion failed), 20-18. 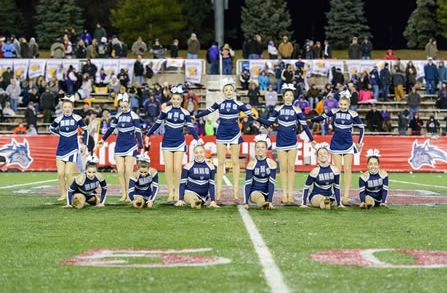 The final frame saw the two teams battling it out. Evans caught a Kocis pass and ran for a long gain, Kocis then scrambled to the two-yard line, but caught a helmet to his thigh and was hobbled the rest of the game.

“When I got hurt, the adrenaline was definitely pumping, but I could still feel it, Kocis said. The senior stayed on the field and two plays later Butts scored on a one-yard plunge. The point after again failed, but Huntington held a 26-18 lead as the clock started to tick down.

Sayville again marched into Blue Devil territory with two minutes remaining. About 30 seconds later, Coan threw a long pass toward the goal line. Players from both teams jumped for the ball. Huntington’s Infinite Tucker came down with it five yards deep in the end zone before racing 75 yards to the Golden Flashes’ 30 with 1:15 remaining. The Blue Devils proceeded to run out the clock to the claim the Suffolk Division III championship.

“The key to our victory was our team’s ability to comeback and fight throughout the entire game,” Kocis said. “Our coaches said all week that this game would be a street fight and the team who fought until the end would win.”

Huntington’s offensive linemen Jimmie Nelson, Asher King, Michael Lonergan, Dan Giraldo and Amaru Jones and in the second half Don Tesoriero did yeoman’s work in dreadful field conditions, opening holes for Greene, Butts and Kocis and providing protection for the quarterback. “The offensive line played outstanding,” Kocis said when asked for the keys to the victory. “They are the hardest workers on the team and we couldn’t do anything without them.”