An extremely rare convergence of the Hebrew and Gregorian calendars will result in the first full day of Hanukkah falling on Thanksgiving Day this year for the first time ever — and the last time for another 75,000 years, experts say. The event even has its own trademarked term, “Thanksgivukkah.” 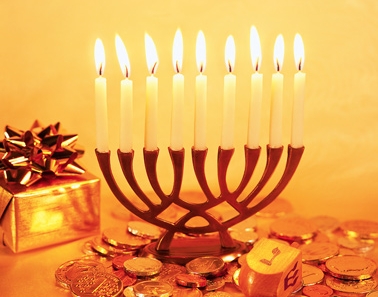 The eight-day holiday of Hanukkah, or Festival of Lights, starts this year at sundown on Wednesday, Nov. 27. While Thanksgiving officially has been around for 150 years, Hanukkah marks an event more than 2,000 years old, when the Jewish people rose up against their Assyrian conquerors in the first known successful rebellion against tyranny.

When the Jews reclaimed the temple in Jerusalem, they rededicated it by lighting the lamp that hangs over the ark holding the Torah — the sacred scroll — which must be kept lit at all times. However, only one day’s oil was found, and it would take eight days for more to arrive. But, miraculously, that one-day supply of oil burned for all eight days.

Hanukkah starts with the lighting of one candle (representing an oil lamp) in a special candelabra called a Menorah. Another, called the “shamus” (said to represent the Lord’s presence), is also lit. One more candle is added each evening until all eight, and the shamus, are alight.

Hanukkah is a family holiday. Gifts are given on each day, usually to the children. Special olive oil-based foods are served. In recent years, a growing number of families have dedicated the celebration to a “Make the World Better” theme, based on the Talmudic teaching that God deliberately created an imperfect world so that every human being could later help move it toward perfection. Children are encouraged to join their parents by donating their “Hanukkah gelt” (holiday money) gifts to causes that further this goal, for example, by making donations to groups that fight hunger and support education and health services.

Some Jews in North America and Israel have taken up environmental concerns in relation to Hanukkah’s “miracle of the oil,” emphasizing reflection on energy conservation and energy independence. An example of this is the Coalition on the Environment and Jewish Life’s renewable energy campaign. Donations also can be made to environmental groups such as the Sierra Club, the World Wildlife Fund or the Jewish National Fund’s tree-planting program. (After all, an environmentally healthy world is automatically a better one.)

Finally, on the eighth day, many families invite friends and neighbors from other religious or ethnic groups to a dinner to celebrate our common aspiration for peace and freedom for all.