An Evening of “Funny Folk” Music in Centerport, Dec. 7

December 4, 2013 7:25 am | Filed under: Around Town,Arts & Entertainment,Events,News | Posted by: The Huntingtonian 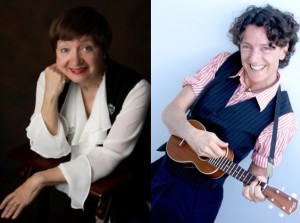 Huntington’s Lois Morton, who writes and performs humorous songs of social commentary, celebrates the release of her second album, 20th Century Girl, during a special evening of “Funny Folk” at the Congregational Church of Huntington (30 Washington Drive, off Route 25A, Centerport) on Saturday, Dec. 7.

She shares the night with Massachussetts-based worldbeat- vaudevillian singer-songwriter Zoe Lewis. The 8:30 p.m. concert, sponsored by the Folk Music Society of Huntington, is preceded by an open mic at 7:30 p.m.

Tickets, priced at $25, $20 for FMSH members, may be purchased online at fmsh.org using a credit card or at the door (cash and checks only). For more information, visit  the website or call (631) 425-2925. Live performance videos of the artists may be viewed on their respective websites — www..loismorton.com and www.zoelewis.com.

Lois Morton has been delighting audiences throughout the New York metropolitan area for several years with her abundant charm and satirical commentary on such subjects as cellphones, clutter, diets, psychotherapy, and road rage. Reinventing herself in retirement, she has gone from being an educator and therapist to a singer-songwriter with a rapier wit and a surprisingly contemporary approach. Her show As I See It (also the title of her debut CD) highlights Lois’ original, often hilarious songs that encourage us to laugh at ourselves.

Songs from As I See It have been spun numerous times on Chicago-area folk DJ Rich Warren’s local and nationally syndicated radio program, The Midnight Special, and Lois performed live in May 2013 on his program and concert series, Folkstage. She was the featured artist on Jon Stein’s “Hootenanny Café (WTBQ-FM, Warwick, NY) in April 2013. Her song “The Diet is Cast” received an “Imprint Radio” Award from the late upstate New York folk DJ Terry Doyle for Best Live Performance and also was nominated for a 2012 MAC Award by the Manhattan Association of Cabarets and Clubs. During the Suzi Wollenberg Folk DJ Showcase at the 2011 Northeast Regional Folk Alliance (NERFA) Conference, Lois drew a standing ovation from an audience that was captivated by her and thoroughly enchanted with her funny songs. Selected for an official juried showcase in 2012, she repeated that feat. Lois Morton’s second album, 20th Century Girl, features 16 of her original songs. Her New York City cabaret revue of the same name was performed at Don’t Tell Mama and the Duplex, with a cast of five.

What Others are Saying About Lois Morton

“For any concertgoer who loves intricate wordplay, Lois is a lodestone discovery. Truly a gem”
– Richard Cuccaro, Acoustic Live! in New York City and Beyond

“Lois Morton is an incredible singer-songwriter and conveyer of songs that strike at the heart of modern society. Her songs, both humorous and serious, are relevant and pertinent. She is hip to today’s world and must be heard!!!
– Jon Stein, host of Hootenanny Café on WTBQ-FM in Warwick, NY

“She’s a plucky, sassy songwriter who writes laugh-out-loud funny material that sparkles with the glow of truth. She can unspool a dense swath of words at a quick clip that would make Gilbert and Sullivan smile with approval and maybe even envy… She zeroes in on observations, situations and irritations that modern life surrounds and confounds us with, but articulates the feelings and pops the balloons of pretentiousness with the sharpest of pins”

Zoe Lewis is a band in a body! She plays jazz, jump jive, Latin grooves, swing, international folk, and funk originals on anything from the piano to the spoons. Originally from England and now residing in Provincetown, MA, she’s a troubadour-vaudevillian-storyteller-singer-songwriter-piece of work, who describes her blend of music as worldbeat-vaudeville. She’s been a co-winner of the Rocky Mountain Folk Festival Troubadour award, a Kerrville New Folk winner, and a Falcon Ridge Folk Festival audience favorite. .Her music is upbeat, amusing and perfect for all ages. While at once settling listeners off balance with her quirky spin on things, she sneaks in simple, potent messages, leaving audiences worn out and inspired.

What Others are Saying About Zoe Lewis

“She merges vaudeville with singer-songwriter. If you want entertainment embellished with subtle enlightenment, sparklingly delivered, Lewis is tremendous.” – SingOut! Magazine

“A true artist., this British transplant is blessed with the uncanny ability to uncover the extraordinary beauty in the seemingly ordinary.” – Bay Windows (MA)