December 6, 2013 2:48 pm | Filed under: Building & Development,Melville,News | Posted by: The Huntingtonian

DFD Development Group held a press conference on December 3, 2013 at 11:00 in front of Huntington Town Hall.  They issued the following Press Release: 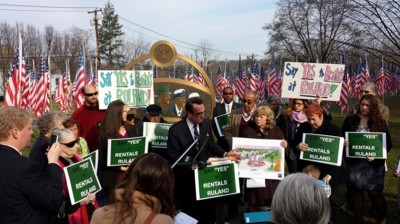 On June 25th, 2013, a settlement was reached on a decade-old law suit between the NAACP and the Town of Huntington regarding construction of affordable housing at Ruland Knolls in Melville.  The settlement would create 117 units of affordable rental housing; 70% one bedroom; 30% two and three bedroom.  A vote to accept the settlement was pulled from the August 13th Board agenda due to opposition from the Sweet Hollow Civic Association.

This is the same Melville civic group that, along with the Half Hollow Hills School Board, prompted the lawsuit by pressuring the Town Board not to permit 200 units of affordable family housing at The Greens in Dix Hills which was zoned for mostly luxury senior housing.  Instead, in 2000, the Town Board voted to create affordable family housing at a different site, Ruland Road in Melville but then zoned the promised Ruland “family housing for only one bedroom ownership units due to pressure from local interests.  Recognizing the racial and class bias underlying this decision which was viewed by the NAACP and others as a violation of the federal Fair Housing Act prohibiting discrimination against families, a federal lawsuit was filed.

On December 10th, 2013 the Town Board will vote on a proposed settlement to this suit that will provide desperately needed affordable rental homes for veterans, young people and working families.  Supporters are demanding that the Town Board heed their own comprehensive plan, Horizons 2020, which calls on them to address Huntington’s “limited…affordable rental housing” choices and to “identify opportunities to provide workforce housing…in appropriate locations compatible with existing neighborhoods, schools and community facilities.”  Located in a largely commercial area of the Town, away from single-family homes, and in the Half Hollow School District that is closing two schools due to declining enrollments, the Huntington Township Housing Coalition believes that Ruland Knolls is such an opportunity that cannot be lost to local NIMBY opposition.

Richard Koubek, President of the Huntington Township Housing Coalition and a Dix Hills resident, said “This settlement will meet the Town’s affordable rental housing needs for young people, veterans and working families.”  he added, “My neighborhood school-Forest Park- is one of the schools on the chopping block because the school district has lost 30 students this year alone.”  Koubek added:  Sadly, a decade ago, had the town resisted opposition from the HHH school district and the local civic groups, and created 200 units of affordable family housing at the Greens plus another 117 units of family housing at Ruland, thee homes could have added enough children to possibly save one of the elementary schools from closing.”

Ulysses Spicer, Second Vice President of the NAACP – Huntington Chapter which filed the lawsuit against the Town, said, “It’s time for the Town Board to recognize the need for affordable rental housing and the opportunity available to them at Ruland Knolls for a sensible, reasonable judgment to create rental unit in Melville.”

Support for rental housing at Ruland Knolls cuts across a broad spectrum of community opinion.

Matt Harris, a civic activist in Huntington Station who was a strong opponent of Avalon Bay at Huntington Station two years ago, said this about Ruland Knolls:  “I opposed Avalon Bay at Huntington Station, not because I am against housing, but the density of the project in a suburban home community was inappropriate.  Now we have an appropriate housing project planned for Melville called Ruland Knolls.  With 70% of these units dedicated to only one bedroom, this almost assures single young people will find an affordable place to live after college outside of their parent’s home.  I support the Ruland Knolls project because it provides affordable rental housing in an appropriate 2 story town house setting.”

Lisa Tyson, Director of The Long Island Progressive Coalition, who had been a strong supporter of Avalon Bay, stated:  “The Ruland Knolls Housing development has been in the courts for too long.  It is time for the Town of Huntington to vote yes and provide affordable rental units now.  Veterans, young people and families cannot wait another ten years for this project to be built.  One, two and three room affordable rental apartments will benefit the Town of Huntington and its residents.”

Peter Florey of D & F Development, which plans to build Ruland Knolls if the Town accepts the court settlement, said, “We now have a rare opportunity to offer quality residences to hard-working people for whom just about all of the available housing in Huntington is financially out of reach.  In addition, as a community, it is incumbent on us to provide reasonably priced new rental housing to our veterans, those who were willing to sacrifice everything for us.”  His sentiment was echoed by James Flavery, a Huntington Veteran,who said, “I am a veteran, and I am grateful that I have a place to live that is affordable.  However I know that this is not the case for many of my veteran brothers.  That is why this housing is so important and deserving of our 100% support.”

Susan Lagville, Executive Director of Housing Help which  is close to beginning construction on affordable housing at Matinecock Court in East Northport after decades of legal and political battles, summarized community frustration over opposition of the court settlement for Ruland Knolls:  “For over 30 years the Town has been turning its back on the residents of Huntington who need affordable rental housing.  It now has an opportunity to provide that housing for veterans, singles and a few families.  Shame!”

The coalition to support affordable rental housing at Ruland Knolls is placing ads in local newspapers, and has launched a telephone and Facebook campaign asking Huntington residents and organizations – such as the Melville Chamber of Commerce which recently endorsed Ruland Knolls – to bombard the Town Board with calls and letters supporting the court settlement.  People are also being asked to turn out at the December 10th Board meeting to demand that the Town Board vote for the settlement which will permit rental housing at Ruland Knolls.