Long Island-based guitarist and singer-songwriter Bob Westcott will host a holiday revue in the Sky Room at the Cinema Arts Centre on Thursday, Dec. 19, from 7:30-10:30 p.m. The special show – featuring Long Island-based artists Ray Lambiase, Bill Lauter and the Hank Stone Band – – is part of the monthly Hard Luck Café series presented by the Folk Music Society of Huntington and is a benefit for both that organization and the Cinema Arts Centre. Tickets, priced at $12 ($8 for FMSH and Cinema Arts Centre members) will be available at the door. There will not be an open mic preceding this show.  For more information, visit www.fmsh.org or call 631-425-2925. 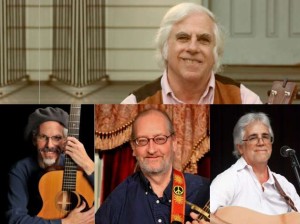 Westcott began his career as a teenager in the basket houses of Greenwich Village and has been perfecting his elegant finger-style guitar work for decades. He was one of the first members of the Wes Houston Band, has been called “the real deal” by noted folk-scene author Robbie Wolliver, and has performed throughout the New York metropolitan area and across the country, as well as in Canada and the UK.

Ray Lambiase of Cold Spring Harbor is a singer-songwriter whose contemporary style borrows from both country and folk traditions. He was part of the Fast Folk musical collective in New York City, has performed extensively throughout New York, and has had songwriting contracts with both Nashville’s Combine Music and Bob Dylan’s Special Rider Music. His latest CD, Time Leaves Things Behind, features 11 of his original songs.

Bill Lauter is a Huntington-based singer and guitarist whose striking vocal interpretations of both traditional and popular material have made him a long-time favorite at acoustic music venues and libraries on LI. His warm, rich baritone voice has an impressive range and a strikingly pure sound, which is enhanced by his highly-refined guitar work. Lauter’s repertoire ranges from spirituals, blues and gospel songs to Celtic and contemporary material and standards — some of which are featured on his CD, Brand New Day.

Patchogue-based singer-songwriter Hank Stone was born and raised in New York City, where he began playing guitar and writing songs as a teenager. After moving to LI during the 1980s and raising a family, he returned to performing as a classic “late bloomer,” first hitting the local stages in 2001 with original songs reflecting his wide-ranging musical tastes and offering a smorgasbord of narratives, character studies, and mood pieces. He has performed across LI, both as a solo artist and in several bands. He released a solo CD entitled Until I Saw that Train last year. Joining him will be Todd Evans on guitar and vocals, Gary Settoducato on drums, and Bob Westcott on bass.

Now in its 45th year, the Folk Music Society of Huntington (www.fmsh.org) presents two monthly concert series, a monthly folk jam and sing-along, and an annual folk festival in conjunction with the Huntington Arts Council.