December 19, 2013 7:43 am | Filed under: Building & Development,Investigations,Melville | Posted by: The Huntingtonian 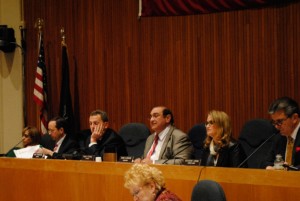 After several hours and dozens of speakers, the town board voted unanimously to delay the decision to settle the Ruland Road law suit.

The lawsuit was initially brought by the Huntington Branch of the NAACP, Fair Housing in Huntington Committee, Inc. (“FHHC”), and several plaintiff’s including; Athena Hawkins, Ian John and Lynda John, Jasmine Curtis, Shavonda Belton, and Serena Camardi. As of today, the NAACP is the only remaining plaintiff.

In the original lawsuit, the town is accused of rejection and obstruction of repeated efforts to create affordable-multi-bedroom housing in Huntington’s overwhelmingly white neighborhoods. The defendants claim to have an extended and well documented history of the town concentrating minorities in the least desirable areas of Huntington in violation of the Fair Housing Act.

In 1988, the Second Circuit Court of Appeals found that the town was in violation of the Fair Housing Act and directed the United States District Court for the Eastern District of New York to compel the Town to amend its zoning laws to allow a nonprofit, multi-family housing development to be built in a white area. 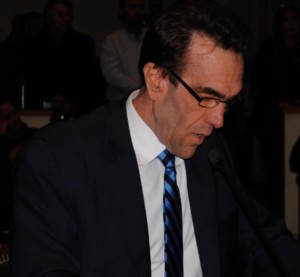 The two- and three-bedroom plan for Ruland Road was never formally acted upon by the town.  Instead, the Town directed the developer to withdraw the two- and three bedroom plan and to replace it with a plan for all one-bedroom units. In June 2000, the developer withdrew its plan to construct affordable multi-bedroom housing at the Ruland Road site and, on September 11, 2000, submitted a new application calling for the construction of 122 all one-bedroom units. The very next day, as stated in the lawsuit, the town board passed a resolution amending its zoning laws to allow for the development of the Greens site. The approval was made contingent upon the developer’s submission of the all one-bedroom plan for Ruland Road. The Town amended its zoning laws to allow the construction of 75 non-age restricted four- and five-bedroom luxury homes and 1,300 senior citizen age-restricted housing units at the Greens site and formally acknowledged the developer’s proposal to construct the one-bedroom affordable units at Ruland Road (“Resolution No. 2000-684”).

Approximately two months later, on November 21, 2000, the town passed Resolution No. 2000-850, which amended its zoning laws to permit the development of 122 one bedroom affordable housing units at Ruland Road.

In direct violation of resolution 2000-684, the Town granted building permits for all of the market value condominium units at the Greens prior to any building permits being issued for affordable housing units at Ruland Road.

On February 5, 2008, the developer submitted a revised site plan, this time calling for the construction of 94 one-bedroom units and 28 two-bedroom units.

After submitting the plans, the developer met with representatives of the Town, including Supervisor Petrone. According to the lawsuit, at that meeting, the developer was told that the Ruland Road application would only move forward as an all one-bedroom plan. As a result, in October 2008, at the town’s insistence, the plans for Ruland Road were changed back to include only one-bedroom units.

In January, 2010, the developer filed with the Town a revised site plan for Ruland Road, which called for the construction of 122 one-bedroom units at the site.

On March 10, 2010, the Planning Board approved site plans for Ruland Road consisting of all one-bedroom units.

According to the lawsuit, Huntington’s history of unlawful discriminatory housing practices has resulted in widespread housing segregation.  It states, “the Town’s long history of preventing minorities from moving into the white areas was recognized by the Second Circuit in Huntington.”

The Second Circuit found that Huntington had a shortage of affordable rental housing for low and moderate income households and that a disproportionate number of African-Americans in Huntington, as compared to white residents, need low-cost housing. As a result, the Second Circuit held that the Town’s housing practices disproportionately harmed African-Americans, and “significantly perpetuated segregation in the Town.” The Second Circuit explained that “the Town has demonstrated little good faith in assisting the development of low-income housing. The court emphasized that the Town’s conduct “clearly demonstrates a pattern of stalling efforts to build low-income housing.”

In its 2000 Consolidated Plan, the town recognized that the need for affordable family housing in Huntington exceeded the need for all other types of housing, including senior housing. The lawsuit states, “despite recognition of this, the town proceeded to amend the zoning for the largest parcel of land available for residential development in the white Areas of the Town – the 382- acre Greens to allow the construction of approximately 1,375 new homes, not one of which was an affordable multi-bedroom housing unit.”

The lawsuit states, “The town’s Consolidated Plan for 2010-2014 states that increasing affordable housing for families is a housing priority for the Town.”

At the same time it drafted this plan, the Town approved plans for Ruland Road that only included one-bedroom units, a limitation that disproportionately excludes racial minorities and families with children from badly needed affordable housing,” as stated in the lawsuit.

As explained in the lawsuit, the power to grant “density bonuses” allowances for more homes per acre than existing zoning would ordinarily allow gives the Town Board and the Planning Board considerable power to dictate what groups of residents a developer will serve.

The Town’s Comprehensive Plan provides that in exchange for density bonuses, the town expects property owners to develop some percentage of their property as affordable housing. In some areas of the town, the percentage is significantly higher than others.

The Greens includes a combination of market rate units and affordable but age restricted housing, but does not include a single unit of non-age-restricted, affordable multi-bedroom housing.  As a result, the developer, the benefactor of the density bonus, was required to develop “affordable, multi-unit family housing” at Ruland Road. This was recognized by the Second Circuit in its 2003 decision in Fair Hous. in Huntington Comm. v. Town of Huntinging, in which the court noted that the town was to require a condition to the change of zoning a prerequisite to permitting of the final phase of The Greens project. It was expected that the developer must develop another site it owns within the town with affordable, multi-family housing.”

The lawsuit alleges that the town’s decision to limit Ruland Road to all one-bedroom units was made with discriminatory intent and has a discriminatory impact on families with children and racial and ethnic minorities. According to the lawsuit, the town’s actions constitute both independent and continuing violations of the fair housing laws and the United States Constitution.

After hours of commentary on December 10, 2013, the board voted to further delay the project.  It is believed that Councilman Cook is the only yes vote to move forward on the project.

The lawsuit has already cost the town residents $400,000. 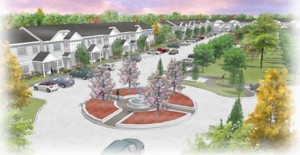 Several of the board members are standing firm on the project consisting of only, for sale – one bedroom units.  Some feel this is a ploy by these councilpeople to make it appear like they are offering something rather than simply rejecting the project. Professions that we spoke to agree there is no market or funding available to construct one bedroom-for sale units.  Some feel the town board members who are opposed to this are aware that a plan like this will never get built and that is their ultimate goal. Some wonder if they are unconcerned if they are in violation of the law and what the final cost to the tax payers will be. Long, costly lawsuits are common place in Huntington.

The developer, D&F Development Group LLC of Levittown, is in contract to purchase the property from its current owner, Ruland Road LLC, but the deadline to lock in a contract is at the end of the month, according to Peter Florey (pictured above right), one of the principals of D&F.

Florey, who spoke at Tuesday’s meeting (pictured above), said that his company is not interested in constructing the one-bedroom units for ownership and would not purchase the property unless the development requirements are changed to align with the proposed settlement.

Peter Florey is hoping to build a project consisting of rental units. He stated the one bedroom for sale units is “not marketable” and “not financeable.”

The delays have been very costly to the developer and it is not likely that he will stick around if the project is further delayed.

(Photos in the article from from the December 10, Town Board meeting.)