December 28, 2013 8:10 am | Filed under: Around Town,Arts & Entertainment,Concerts,News | Posted by: The Huntingtonian 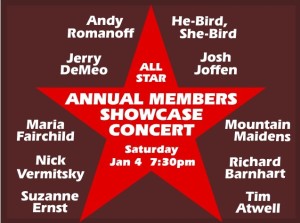 The Folk Music Society of Huntington showcases some of its talented members in a special concert set for Saturday, January 4, at the Congregational Church of Huntington, 30 Washington Drive (off Route 25A), Centerport. Since this concert, for which tickets are $15 for members and $20 for non-members, begins at 7:30 p.m., there will not be an open mic preceding it. Tickets may be purchased online at fmsh.org using a credit card or at the door (cash and checks only).

As a volunteer-run, nonprofit organization, FMSH is supported in large part through memberships. Although the organization’s First Saturday Concerts series usually features national and international touring artists, one evening each season is devoted to a Members’ Showcase Concert to enable some of its own talented members to showcase their musicianship, singing and songwriting skills. As in past years, this one will feature a wide variety of performers and musical styles.

Now in its 45th year, the Folk Music Society of Huntington presents two monthly concert series, a monthly folk jam and sing-along, and an annual folk festival in conjunction with the Huntington Arts Council. Next up following the Members’ Showcase concert is the Hard Luck Café at the Cinema Arts Centre on Thursday, January 16, featuring the LI-based Toby Tobias Ensemble and NYC-based singer-songwriter Brad Cole. The featured artists for the February 1 First Saturday Concert will be Caravan of Thieves. For more information, visit www.fmsh.org or call 631-425-2925.