Cuthbertson, Berland Participate in Avalon Bay Lottery After Preventing Rentals in Another Part of Town

Editor’s note:  Earlier this month, Berland and Cuthbertson chose to continue a costly tax payer funded lawsuit to prevent rentals from being built in another part of the town (Ruland Road).  They are celebrating affordable rentals in Huntington Station.  Huntington Station currently has 72% of the non-senior affordable housing for the entire township.  The completion of Avalon Bay will increase that percentage. 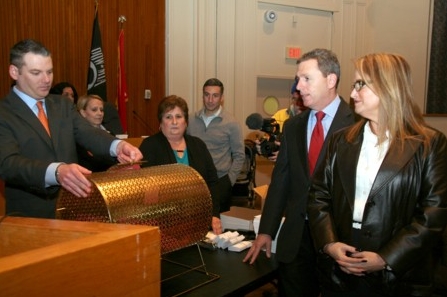 As applicants watched in enthusiastic anticipation at the Town Board meeting room January 7, Huntington Town Council Members Mark Cuthbertson and Susan A. Berland pulled names from a drum to determine the order in which persons will be offered an opportunity to rent one of the affordable units at the almost-completed Avalon Huntington Station development.

A total of 488 applications were submitted for the 43 affordable units — nine three-bedroom, 20 two-bedroom and 14 one-bedroom – that are among the 303 rentals in the community, located on East Fifth Street in Huntington Station. The remaining units will be rented at market rate.

Council Members Cuthbertson and Berland each offered encouragement to the approximately 300 people in the audience, welcoming them to a project that is the latest step to near completion in Huntington Station’s revitalization. The Town required the affordable units as part of the agreement in which Avalon Bay Communities was granted increased density for the project, which also will include 64 for-sale residences.

The lottery was held under the auspices of the Town’s Community Development Agency and the Long island Housing Partnership, which will administer the affordable program. The Housing Partnership will screen applicants, conducting background and credit checks, and match applicants’ needs with available space.

At the beginning of the evening, Housing Partnership president and CEO Peter Elkowitz went over the details of the lottery and Matthew Whelan, senior vice president for development at Avalon Bay Communities, spoke about the timetable for completing the project, including opening the clubhouse later this month.

One Response to Cuthbertson, Berland Participate in Avalon Bay Lottery After Preventing Rentals in Another Part of Town