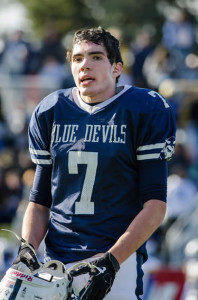 While Christian Jamison loves playing football and does it with a hard nosed attitude, the teenager knows it’s only a game. The Huntington High School senior was presented with the LaBue Award by the Suffolk County Football Coaches Assn. as this year’s top scholar football player.

The award was presented to Jamison during a dinner attended by a crowd of 1,200 at the Wind Watch Golf & Country Club in Hauppauge in December. He has compiled an academic grade average of 102-plus with a combined SAT math/verbal score of 1,530. Among the colleges that Jamison is currently considering are Harvard, Yale, Princeton and MIT.

Jamison played wide receiver and outside linebacker for Huntington this fall. The 6’3, 190 lb. senior was one of Huntington quarterback Ben Kocis’ favorite passing targets with 49 receptions for 784 yards and seven touchdowns. Defensively, Jamison recorded 38 tackles, 13 assists, six pass deflections, two interceptions, a quarterback sack and a tackle for a loss.

“It has been an honor to play for Huntington over the last four years,” Jamison said. “I am thrilled over how well the team has done this year and can’t think of a better way to end my career here than playing in the Long Island Championships. I am proud of how our team has overcome some tough losses. I will always remember long practices and Friday night dinners.”

Mr. Jamison, who has been named to the All-State string orchestra, said his college academic interests “lean towards” math and science. “My future plans are still up in the air,” the senior said. “I am hoping to play football at the next level, but don’t have definite plans yet.” 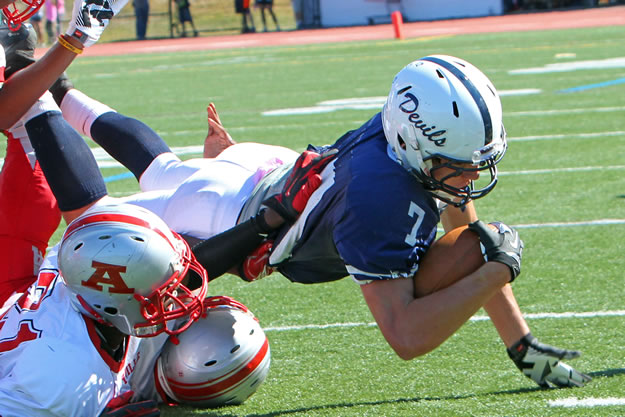 The LaBue Award is named in honor of James LaBue, a 1978 Sachem graduate who went on to play at Ithaca College. He perished in a tragic car crash. Jamison is the third Huntington High School player to receive the award following Chris Mooney (1999) and Jack Sullivan (2004). Mooney went on to be a football star at the University of Delaware while Sullivan was a wrestler at the University of Pennsylvania.

LaBue Award winners through the years