January 30, 2014 2:33 pm | Filed under: Around Town,Arts & Entertainment,Concerts,Events,News | Posted by: The Huntingtonian 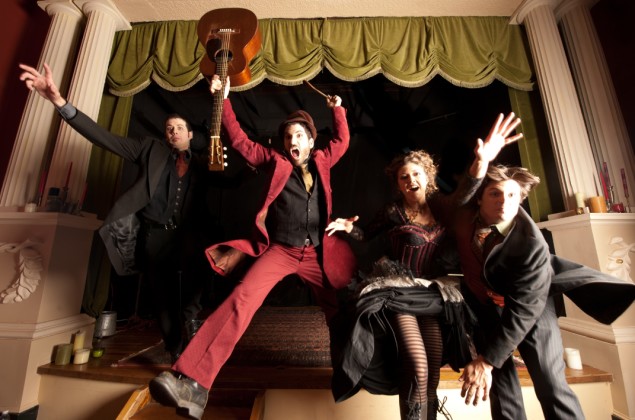 Caravan of Thieves bring a unique blend of gypsy swing and popular music to Centerport on Saturday, February 1. The New England-based group’s 8:30 p.m. concert at the Congregational Church of Huntington (30 Washington Drive, off Route 25A), sponsored by the Folk Music Society of Huntington, is preceded by an open mic at 7:30 p.m. Tickets, priced at $25, $20 for FMSH members, may be purchased online at fmsh.org using a credit card or at the door (cash and checks only). For more information, visit the website or call (631) 425-2925.

If Django Reinhardt, the cast of Stomp and the Beatles all had a party at Tim Burton’s house, Caravan of Thieves would be the band they hired. Driving gypsy jazz rhythms, acoustic guitars, upright bass and violin lay the foundation for mesmerizing vocal harmonies and fantastic stories. Audiences often join the band in spontaneous fits of claps, snaps and sing-a-longs.

Currently touring in support of a new single, “Dead Wrong,’ Caravan of Thieves will treat concertgoers to a show that channels pop bliss through its trademark lock-tight, turn-of-the-century, bang-out-a-beat-on-anything-that-can-take-it approach.

Click here for link to the official music video for “Dead Wrong”.

Like many families, Caravan of Thieves was started with a married couple, Fuzz and Carrie Sangiovanni (guitar, vocals, and various percussive “instruments”), writing and performing as a duo. By the spring of 2008, Fuzz and Carrie had extended their “family” to include fiery violinist Ben Dean and double bass madman Brian Anderson. Since then, the band has taken its dynamic live experience on the road — sharing stages with a number of world-renowned artists and performing at music festivals across the country.