Lupinacci & Colleagues Interview Candidates For State Board of Regents

February 6, 2014 8:12 pm | Filed under: Around Town,Government,Sports & Schools | Posted by: The Huntingtonian

Press Release From the Office of Assemblyman Chad Lupinacci 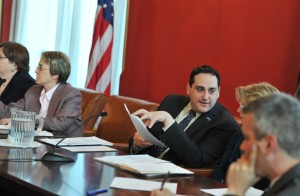 As Ranking Minority Member of the Assembly Higher Education Committee, Assemblyman Chad Lupinacci was part of a select group of lawmakers chosen to interview the prospective candidates for the state Board of Regents yesterday. Lupinacci, a former South Huntington School Board member, addressed several of the hot-button issues facing education with the candidates: Common Core, teacher evaluations, student data-usage by third parties, and high-stakes standardized testing.

“The Board of Regents plays a vital role in charting the course of education in our state,” said Lupinacci. “During the hearings my colleagues and I held over the past few months, we repeatedly heard parents, educators, administrators and students share their concerns about the Common Core Standards and the current state of New York’s education system. During the interview, I felt it was absolutely critical that we begin to address a few of the controversial mandates implemented by the board. Any new appointee must be prepared to deal with the ongoing crisis surrounding Common Core and be open to discussing all possibilities to make our education system better. While today’s hearing provided some insight, I look forward to further dialogue with the candidates to learn their views on the future of our education system.”

Currently, the Board of Regents is elected via a full roster vote of the Assembly and Senate members. Lupinacci is sponsoring legislation which would shift the system to have Regents elected by the public, providing greater openness and transparency in the board’s elections.

Assemblyman Lupinacci and his colleagues in the Assembly Minority Conference recently released a report on New York’s education system and their proposed changes, the APPLE Plan. To learn more about the report or the Assemblyman’s proposed changes, please visit, http://www.scribd.com/doc/201548711/New-York-State-Assembly-Minority-Conference-s-APPLE-Plan