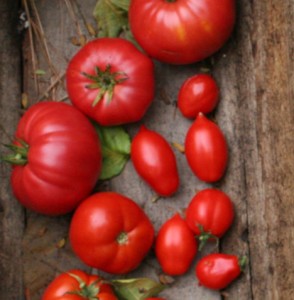 On Sunday February 16, 2014, from 6:30 pm to 9:00 pm, Slow Food Huntington & Cinema Arts Centre are presenting Long Island’s first Film Feast in Five Courses, an enchanted evening highlighting our local food, the people who produce it, and the difference it can make.

Several short films (each 3 to 30 minutes long) will be followed by servings of food featured in the film, as well as a guest speaker so you will have a glorious, local, seasonal and informative feast. The art of Lauren Singer will be on display, which addresses concerns about genetically modified foods and how the environment affects the food we reap and the soil we live on.

“We are so excited about this event!  It’s a multi-sensory experience that will intrigue your mind and delight your taste buds! You won’t want to miss the feast!”, says Bhavani Jaroff, Co-Chair of Slow Food Huntington and Founder of iEat Green, LLC.

The films, speakers, and food will include:

First Film: Growing Farmers – A film that addresses the issue of access to affordable farmland as the greatest impediment to young farmers starting out on Long Island, and what the Peconic Land Trust is doing to help them.

Steven and Natalie Judelson are sea salt fanatics and the husband & wife team behind Amagansett Sea Salt Co. on Long Island, NY. They are New York State’s only sea salt makers and one of only four artisan salt makers on the entire Eastern Seaboard.

The Secret Life of Beef A film about how eating industrial beef contributes to greenhouse gas emissions, and its impact on our water, air and soil.

Divine Brine The making of a local pickle company, here on Long Island.

Fourth Film: A Pasta Story- In the Hills of Tuscany, at Azienda SanCristoforo, the Pedrini family shares their passion for heirloom grains, biodynamic farming and making pasta.

Fifth Film: Greyston Bakery– A Social Justice Film about a Bronx company that hires the hard-to-employ, and uses all of the profit to fund low-income housing, a day care center open to the community, a medical center for those with AIDS, and other community endeavors.

Food will be provided by iEatGreen, Slow Food Huntington, Mascali-Larkfield Pasta, Greyston’s Bakery and Huntington’s Ben and Jerry’s . The event will take place in the Sky Room at the Cinema Arts Centre, at 423 Park Avenue, Huntington , NY. The cost is $40 for Slow Food or Cinema members, or $50 for nonmembers, and $55 for anyone at the door. Please RSVP to http://www.brownpapertickets.com/event/560729. For more information see http://slowfoodhuntington.org/.