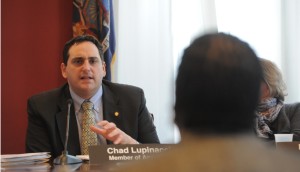 Assemblyman Chad Lupinacci, the Ranking Minority Member of the Assembly Higher Education Committee, recently participated in the second round of candidate interviews for the state Board of Regents. Lupinacci was joined by a group of his colleagues who were selected to conduct the second round interviews, which primarily consisted of incumbent candidates. As a former South Huntington School Board member, Lupinacci continued to stress to the candidates his concerns with the current education system, as well as concerns with the direction it could be headed in.

“I am pleased to have had the opportunity to meet with the prospective and incumbent candidates for the New York State Board of Regents. If chosen for a position on the board, these individuals would play a crucial role in the direction of our state’s education policy,” Lupinacci said. “Common Core, teacher evaluations, high-stakes standardized testing and student data usage by third parties are just a few of the major issues our education system is currently being faced with. I couldn’t stress enough to the candidates how important it is that we address the shortcomings on the Common Core curriculum. After hosting several education forums, my colleagues in the Assembly Minority Conference and I know first-hand that the implementation of the Common Core standards must be reviewed and reformed in order to provide our students with the tools and learning environment they need to be successful.”