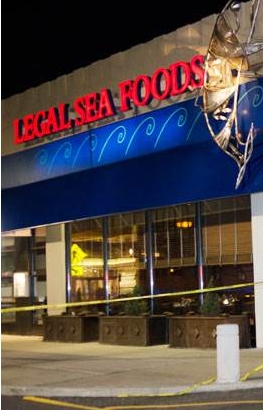 On February 22, 2014, at approximately 6:00 p.m. Suffolk County Police responded to Legal Sea Foods in the Walt Whitman Mall.Police and emergency personnel from Huntington Manor Fire Department responded to a report that a woman had fallen and hit her head in the basement at Legal Seafood, located at 160 Walt Whitman Road.  Soon after arriving, police and emergency personnel felt nauseous and dizzy and recognized it as a carbon monoxide event.

Police evacuated the restaurant and found the manager, Steven Nelson, 55, of Copiague, unconscious in the basement. He was transported to Huntington Hospital where he was pronounced dead.

Twenty-seven other victims, including four ambulance personnel and three police officers, were transported to five area hospitals with non-life threatening symptoms. Most of the victims were employees at Legal Seafood. The investigation is focusing on the restaurant’s heating equipment.

Legal Seafood and surrounding restaurants, Panera Bread and The Cheesecake Factory, were evacuated. The carbon monoxide appears to be confined to the basement of Legal Seafood.

Homicide and Arson Squad detectives are continuing the investigation.