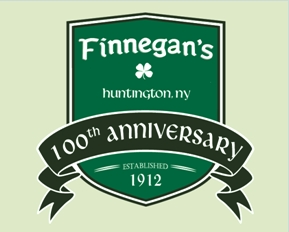 Sitting out one of our many snowstorms this year in Huntington Village, I stopped in to Finnegan’s Restaurant and Tap Room, located at 5 Wall Street, Huntington, New York 11743 for an ice cold beer.  The manager, Tom Forte, served me with a warm and friendly smile as soon as I sat down.

After a few minutes I realized that the décor in the entire place was old and well kept.  The sign by the mirror behind the bar, said “100th Anniversary, Established 1912.”  Okay that means we are now in Finnegan’s 102nd year and St. Patrick’s Day is right around the corner!  Speaking to Tom I learned that Finnegan’s is rich in Huntingtonian history and was a speak easy during prohibition during the 1920’s.

While there, the first proprietor, Andrew Finnegan’s (1871-1945) great-granddaughter, Mary Finnegan was having lunch at the bar and overheard my conversation with Tom.  She shared a lot more of the history of this establishment with me.

Finnegan’s once covered the area from Starbuck’s to the Optical store on Wall Street.  During prohibition, the clientele were able to purchase alcohol in what was then called a speak easy, which was not legal and there were numerous raids for the crime of serving alcohol.  Since those times, it has become known as the “Cheer’s” of Huntington, “where everybody knows your name!”

The Finnegan family sold their interest in 1975 and it has changed hands a few times. It is currently owned and managed by Lessing’s Hospitality,  headquartered in Great River, New York.  Lessing’s has maintained the warm and friendly atmosphere that Andrew Finnegan began over 100 years ago! 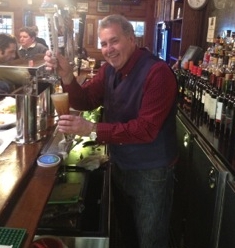 I worked up quite an appetite while learning of this very interesting history so I decided to have the Saturday daily special of Classic Meatloaf, which includes mashed potatoes, gravy and sauteed vegetables, all for $14.95.  It was absolutely delicious and the server, Alexa, was wonderful.  The full menu can be found at www.lessings.com or just call Tom at 631-423-9696.

I recommend this restaurant and tap room any day of the week, but since the Huntington St. Patrick’s Day Parade is coming up on March 9, I highly recommend you stop by before, during or after the parade and say hi to Tom and Alexa for me.  Stop in soon and they will probably remember your name by parade time!