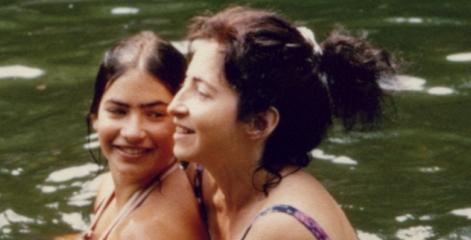 Reelabilities: NY Disabilities Film Festival dedicated to promoting awareness and appreciation of the lives and stories of people with different disabilities

Told through the intimate, dramatic audiotapes left behind by a bipolar mother after committing suicide and the longing daughter who discovered them, Here One Day follows a New York family through life, devastation, tragedy, and rebirth. Filmmaker Kathy Leichter will appear for a Q & A following the Film Festival.

$10 Members / $15 Public / Includes reception. Tickets can be purchased online, www.CinemaArtsCentre.org at the box office during theater hours or by calling Brown Paper Tickets at 1-800-838-3006

When filmmaker Kathy Leichter moved back into her childhood home after her mother’s suicide, she discovered a hidden box of audiotapes. Sixteen years passed before she had the courage to delve into this trove, unearthing details that her mother had recorded about every aspect of her life from the challenges of her marriage to a State Senator, to her son’s estrangement, to her struggles with bipolar disorder. Here One Day is a visually arresting, emotionally candid film about a woman coping with mental illness, her relationships with her family, and the ripple effects of her suicide on those she loved. USA, 2012, 76 min., Documentary | Director: Kathy Leichter | Hot Docs 2013.

ReelAbilities: NY Disabilities Film Festival is the largest festival in the country dedicated to promoting awareness and appreciation of the lives, stories and artistic expressions of people with different disabilities. Initiated in NY in 2007, the festival presents award winning films by and about people with disabilities in multiple locations throughout each hosting city. Post-screening discussions and other engaging programs bring together the community to explore, discuss, embrace, and celebrate the diversity of our shared human experience.

Kathy Leichter is a documentary film producer and director and the founder of Two Suns Media and Mint Leaf Productions, both based in New York City. She is the director and producer of HERE ONE DAY, which was invited to some of the most prestigious documentary film festivals in the world and is now traveling the country in community screenings to reduce stigma around mental illness and suicide. Leichter recently produced HIDDEN BATTLES, a documentary about the psychological impact of killing on soldiers from across the globe. She also directed and produced PASSING ON, about her ninety-one year old, tell-it-like-it-is grandmother, Elsa, an Austrian Jewish immigrant and family therapist, and the award-winning PBS documentary, A DAY’S WORK, A DAY’S PAY about three welfare recipients who become leaders in the fight against workfare in New York City. Leichter was the Project Director of THE WORKFARE MEDIA INITIATIVE, a media activism project which trains current and former welfare recipients to show A DAY’S WORK, A DAY’S PAY and lead facilitated discussions educating audiences about economic justice and community organizing. Other credits include producer of the award-winning films, SPIT IT OUT, about a man who stutters and his journey towards self-acceptance, and producer of MOTHERS AND DAUGHTERS: MIRRORS THAT BIND, about the impact of the mother/daughter relationship on a woman’s body, sexuality, and self-esteem. Formerly Leichter worked at WQED-PBS, where she produced a national series on health care reform and worked for MISTER ROGERS NEIGHBORHOOD.