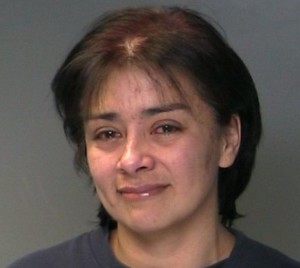 Suffolk County Police arrested a woman who left her 4-year-old son unattended in a car while shopping in Huntington Village.

On Sunday, March 2, 2014, Second Precinct Police Officer Peter O’Brien responded to a 3:08 p.m. call in which a witness reported a young child left unattended in a vehicle that was parked in the Wild by Nature parking lot located at 369 West Main St., Huntington.  Upon arrival, Officer O’Brien observed the child in the backseat of a gray Toyota Yaris that was locked and not running.  Witnesses stated that the child, who was in the car with a dog, had been in the vehicle approximately 20 minutes prior to police arrival.  The outside temperature was approximately 37 degrees at the time of the incident.

When the children’s mother, Marcela Monaco, 39, of Bayville, returned to the vehicle, she was arrested and charged with one count of Endangering the Welfare of a Child.

Monaco will be held overnight at the Fourth Precinct and is scheduled to be arraigned at First District Court in Central Islip on March 3.

A notification will be made to Suffolk County Department of Social Services Child Protective Services Bureau.