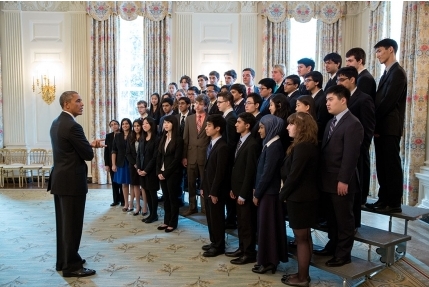 Aron Coraor made history when the Huntington senior won sixth place honors in the 2014 Intel Science Talent Search, the premier high school science and math competition in the world.

Mr. Coraor, who is planning a career as a professor of chemistry or chemical engineering, received a $25,000 award for his research that seeks to explain why a certain mineral exists in two different forms in the highlands of the moon. His sixth place finish is the highest of anyone from New York this year. It is the best finish ever for a Huntington High School student.

“Simply stated, this is just an outstanding achievement,” Huntington Superintendent James W. Polansky said. “Aron’s research has been recognized as among the top six projects in the most prestigious science competition in the country. I am sure he will return from Washington D.C. with a wealth of stories and memories, as well as a huge smile. I am thrilled for him, his family, his teachers and all who may have inspired him along the way.”

One of the top students in Huntington’s Class of 2014, Mr. Coraor has been an integral member of the high school science research program. He has worked closely with teacher Lori Kenny, who has mentored the teenager during the past four years. Mrs. Kenny said that Mr. Coraor’s performance in Washington, DC was “amazing.” 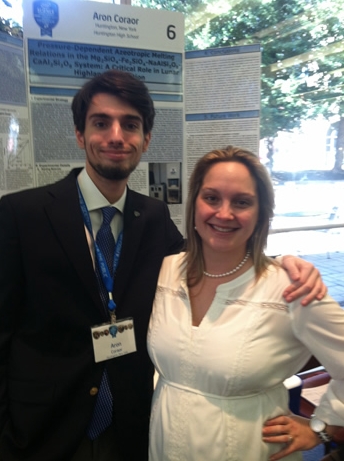 “I am completely elated with his success,” said Mrs. Kenny about Mr. Coraor’s showing in the Intel finals. “All of the students at the competition raved about how wonderful Aron is. He was described as both highly intellectual and compassionate by his peers.”

One of 40 high school seniors that reached the Intel finals, Mr. Coraor and members of the elite group spent most of the past week in Washington, DC presenting their research projects and undergoing a final round of rigorous judging. The top ten finishers were announced during a gala dinner at the National Building Museum.

This year’s finalists join the ranks of other notable Science Talent Search alumni, who over the past 73 years, have gone on to win eight Nobel Prizes, two Fields Medals, five National Medals of Science, 11 MacArthur Foundation Fellowships and even an Academy Award for Best Actress.

“We at Intel celebrate the work of these brilliant young scientists as a way to inspire the next generation to follow them with even greater energy and excitement into a life of invention and discovery,” said Wendy Hawkins, executive director of the Intel Foundation. “Imagine the new technologies, solutions and devices they will bring to bear on the challenges we face. The Intel Science Talent Search finalists should inspire all of us with hope for the future.”

Mr. Coraor spent about 25 hours per week conducting research for his project in a lab on the Stony Brook University campus. He has been mentored by Stony Brook Distinguished Professor Emeritus Donald H. Lindsley, who holds degrees from Princeton and Johns Hopkins. Dr. Lindsley has been on the Stony Brook faculty since 1970 and once served as the chair of the department of geosciences.

Mr. Coraor’s research sought to explain the formation of the Moon. “The current accepted model for how the Moon formed was largely developed in the 1970’s when the bulk of the Apollo samples from the Moon’s surface were analyzed,” he said. “However, while this traditional model has been improved slightly over time, an increasing number of inconsistencies between this model and data on samples from the Moon are being found. My project aimed to solve some of these inconsistencies by proposing alternate mechanisms by which the crust of the Moon may have formed. I justified the conclusions of my project by creating in a lab a magma [that is] similar to what likely would have been found billions of years ago as the Moon was solidifying and by measuring the composition of the crystals that formed from this synthetic magma.”