March 15, 2014 2:28 pm | Filed under: Around Town,Arts & Entertainment,News,Politics,Sports & Schools | Posted by: The Huntingtonian

From the office of Assemblyman Andrew Raia: 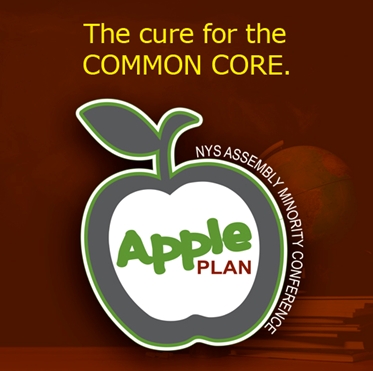 Assemblyman Andrew Raia and his colleagues in the New York State Assembly Minority Conference reaffirmed their pledge to bring about real education reform with their Achieving Pupil Preparedness & Launching Excellence (Apple) Plan while at a press conference in Albany.

“We have a realistic, yet bold, plan to fix the failed policies of the state Education Department,” said Raia. “With students, teachers, parents and administrators bracing for another round of Common Core testing in April, it is vital that precious time is not wasted on half-hearted attempts at reform. Our current system of standardized testing, teacher evaluations and the manner in which Common Core has been implemented just isn’t working.”

The Apple Plan calls for a delay of Common Core until a comprehensive review of the standards has been completed, at which time the standards, if deemed acceptable, would be phased in on a grade-by-grade level starting in first grade. The Apple Plan would also eliminate the 2011 GEA school funding cuts; create an independent teacher panel to develop, review, and approve age-developmentally-appropriate curriculum; and severely restrict data mining of our children’s personal information. This plan was created after 11 public forums were held by the Assembly Minority across the state, where hundreds of concerned parents, teachers and administrators gave their input on the implementation of Common Core and other state education issues.

The entire report compiled after the hearings can be read here.