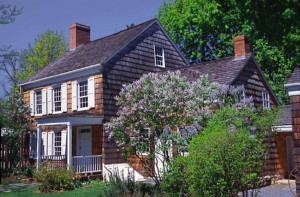 The b.j. spoke gallery and Walt Whitman Birthplace team up to create a dynamic series of four art exhibitions at the Birthplace’s restored barn, known as the Gathering House.

The four exhibits will be showcased as part of the “Gathering House Gallery” Series with exhibits scheduled throughout the months of April, May, July and August. The first exhibit, titled “Spring Meditations,” runs from April 1 to April 27.

“Spring Meditations” opens with a Garden Party, refreshments and festive music on Sunday, April 6, from 1-3 pm. The reception celebrates art by Richard Anello, Katherine Criss, Liz Ehrlichman, Lorraine Nuzzo, Patti Who? and John Bell. These featured artists range from painters and photographers to sculptors in mediums of metal and marble.

Garden Party receptions for the subsequent three exhibitions are on Sundays from 1-3 pm on May 4, July 13, and August 10. All receptions are free and open to the public.

The b.j. spoke gallery was founded on the belief that the partnership between artists and the public is an essential relationship fundamental to creating a unique dialogue about art and its role in the communities it serves. This new venture extends the dialogue by taking the conversation beyond Huntington Village to the Whitman Birthplace, and brings a diverse range of artistic forms and perspectives to the walls of the Gathering House Gallery.

The Walt Whitman Birthplace Association is Walt Whitman’s voice today celebrating Whitman’s vision of democracy, diversity and creativity. WWBA eagerly joins b.j. spoke in expanding the dialogue about art and the community it serves by hosting the “Gathering House Gallery” Series throughout the summer.

For more information about the artists and their work, please visit www.waltwhitman.org.

About the Walt Whitman Birthplace Association
Founded in 1949, WWBA is Walt Whitman’s voice today, celebrating the poet’s vision of democracy, diversity, and creativity. WWBA programs and exhibits educate the public on Whitman’s life and times, explore his contribution to our nation’s rich cultural heritage, and inspire young poets and writers. Over 16,000 national and international tourists visit the Birthplace each year.