An Evening of Fingerstyle Guitar in Centerport, April 5 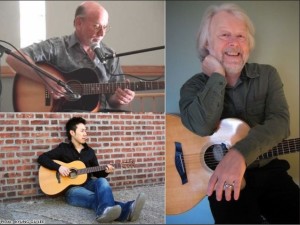 The Folk Music Society of Huntington presents An Evening of Fingerstyle Guitar on Saturday, April 5, at the Congregational Church of Huntington, 30 Washington Drive (off Route 25A), Centerport, NY. The mainly instrumental song swap will feature Bob Ardern from Canada, Long Island’s own Howard Emerson, and Japan native and NYC resident Hiroya Tsukamoto. Tickets for the 8:30 p.m. concert, which is preceded by an open mic at 7:30 p.m., are $25; $20 for FMSH and Long Island Fingerstyle Guitar Club members. They may be purchased in advance online at www.fmsh.org using a credit card or at the door (cash and checks only). For more information, visit the website or call (631) 425-2925.

Bob Ardern combines masterful finger-style guitar playing with melodies that conjure vivid images and then pulls it all together into a captivating sound. With influences from Celtic, classical and jazz music, Ardern’s guitar stylings take listeners on a spectral journey of emotions. Having grown up in the golden era of English folk music, the Canadian artist learned from some of the great names of the genre. While retaining those influences, he also listened to and was affected by Canadian and American roots music and shaped the two styles into his own unique blend. Ardern is touring the Northeast this Spring in support of his new release, Craftsman. His 2012 release, Wires, Rosewood and Roots, was nominated for Best Instrumental Album – Acoustic in the Zone Music Reporter Awards and ranked #6 on  the new age, world and instrumental music industry organization’s annual Top 100 albums chart.

Howard Emerson is a self-taught guitar player who has been hailed for his expressive and fluid style. He began playing at age 12, learned to fingerpick in the fall of 1969, and later, bottleneck and open tuning. He cites Ry Cooder, Randy Newman and Little Feat as major influences. In the early-mid-1970s, Emerson recorded and toured with Richard Supa and with folk legend Eric Anderson. During that time, he also played with a band named Topper that eventually became the Billy Joel Band. A touring clinician for the C.F. Martin Guitar Company, Emerson also teaches guitar at his Huntington Station home, as well as to students around the world via videotaped lessons. His latest CD, It Ain’t Necessarily So, was released in 2012.

Hiroya Tsukamoto is a gifted composer and guitarist from Kyoto, Japan, who came to the U.S. a decade ago on a scholarship to study at Boston’s Berklee School of Music and now resides in NYC. A finalist in the International Acoustic Music Awards and the USA Songwriting Competition, Tsukamoto wowed attendees during a featured showcase performance at the 2013 Southeast Regional Folk Alliance Conference and also performed during last summer’s Huntington Folk Festival. He has released two solo albums and has recorded several albums with the multicultural group Interoceanico. Influenced by the South American Nueva Cancion Movement, Tsukamoto’s impressionistic, inventive and highly innovative musical style features interesting chord patterns, a wide rhythmic mix, and incorporates elements from various genres.

Now in its 45th year, the Folk Music Society of Huntington presents two monthly concert series, a monthly folk jam and an annual folk festival in conjunction with the Huntington Arts Council.