Huntington Supervisor Frank P. Petrone, flanked by Councilman Mark Cuthbertson, U.S. Rep. Tom Suozzi, veterans and Italian-American groups, declared today that Huntington will not consider removing the Christopher Columbus statue that has served as a gateway to Huntington Village for more than 40 years. 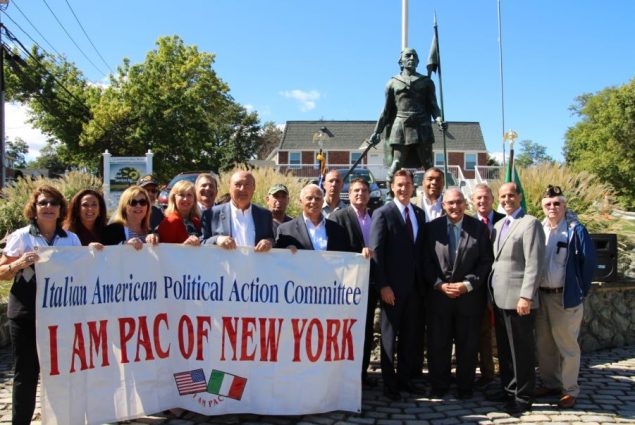 Supervisor Petrone’s statement, made at the statue, comes against the backdrop of calls elsewhere in the region and nationwide that Columbus statues be removed from public view, amid discussion over Columbus’ actions after landing on these shores.

“Christopher Columbus is a symbol for the positive contributions Italian-Americans have made to this country for more than 500 years, and removing this representation of Italian-American pride would be a slap at all of the Americans of Italian extraction who have made our country what it is today,” Supervisor Petrone said. “Just as Huntington is proud to have hosted the Long Island Columbus Day Parade for the past 15 years, we are additionally proud to be the home of a statue celebrating all those accomplishments from Columbus on.”

Speaking “as a proud Italian-American,” Councilman Mark Cuthbertson said, “When we look at this, look at St. Patrick’s Day. St. Patrick’s Day isn’t just about the Federation of St.  Patrick. It is about Irish-American culture, just like Columbus Day isn’t just about Columbus. It is about how we venerate Italian-American culture and how proud we are of the wonderful immigrant stories, the culture, the music the food. It is about so much more.”

Council Members Susan A. Berland, Eugene Cook and Tracey Edwards were unable to attend the event, but all noted their support for leaving the statue where it is.

Rep. Suozzi said, “Growing up, Christopher Columbus, Columbus Day and Columbus statues were a celebration of our Italian-American heritage. My father’s stories and histories of Italian-American discrimination were outweighed by the celebration of this Italian discoverer. There is always more to learn about the past and we should encourage continuous education about the history of our country, its founding and Native Americans, but we cannot disregard the importance of Columbus, his accomplishments and his role in Italian-American culture.”

Huntington’s Columbus statue has been on display for more than 40 years, almost all of that time in a plaza at the intersection of Main Street and Lawrence Hill Road, at the gateway to Huntington village. The statue was commissioned by Sam Albicocco, a Huntington resident of Italian-American heritage, as symbol of the contributions Italian-Americans have made to this country in fields such as government, the arts, science and business. The cost was financed with contributions from hundreds of Long Islanders, also proud of their Italian-American heritage. Each year, elected officials gather at the plaza with representatives from Sons and Daughters of Italy lodges across Long Island and lay a wreath on the Thursday preceding the parade, which this year is on October 8.

“As anyone who has viewed the parade knows, it is not only about one man, Christopher Columbus,” Supervisor Petrone said. “It is about the millions of Long Islanders of Italian extraction who take pride in their heritage and their contributions to our Town, our Island, our State and our Country. Here in the Town of Huntington – a town that values diversity, and inclusiveness, and, above all, history – we have no plans to cancel the parade. And we certainly have no plans to even consider taking down this statue.”