March 9, 2018 7:28 am | Filed under: Fairs and Festivals,Heart of the Community,News | Posted by: The Huntingtonian 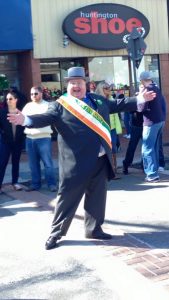 This year the Huntington AOH is proud to announce that Andrew X. Brady will lead the 84th Huntington St. Patrick’s Day Parade as Grand Marshal.

Brady is a thirty-year member of A.O.H Division # 4.  He has served as a member and chair of numerous committees, as Division Vice President and then Division President from 2012-2014. He is a veteran of the Unite States Army, having served in the Berlin Brigade and is the Commander of American Legion Post # 360 in Halesite, NY.  He is a former Suffolk County Republican Committee member and a member of Veterans of Foreign Wars Post # 1469.  Andrew served as the former long-standing secretary of the Goodfellows Club of Suffolk County, Inc. is a 30 year plus member of B.P.O. Elks 1565 and remains active in numerous charities across Long Island. Andrew looks at his being named as Grand Marshal as recognition of his dedication to the Ancient Order of Hibernians. Andrew is honored to lead the 84th edition of the parade down Main Street this coming March 11th with his 89 year-old father, Bob Brady, Sr., and his brothers Bob, Jr., Sean and Cliff as Aides.

On parade day, Andrew will proudly lead the line of march along New York Avenue and Main Street. Over the past 84 years, the parade has grown to become the oldest and largest on Long Island. While there are only a few folks around who remember that first St. Patrick’s day parade, they will tell you that it is the day Huntington puts her best face forward and everyone has a wee bit of Irish in them. Each year up to 50,000 current and former residents jam Huntington Village for this wonderful family and community event. More important than ever, the Parade is also a tremendous catalyst to the local Huntington economy, with spectators packing the local restaurants, shops, and pubs. “Buying local” not only feels good it helps all of us.

The core of the Parade is of course the Bagpipe bands, and no parade on Long Island can match the Huntington’s line-up with bands from all over the Island. This year the Parade will include over 25 marching bands

Although the Scots lay claim to the bagpipe, the bagpipe existed in Ireland long before Scotland. It was used during religious celebrations, funerals and to assemble villagers and town’s people in time of emergencies and in time of war. So, when you hear the sounds of the pipes being played it will touch the hearts of all who listen and remind us of the Irish of centuries ago who fought for freedom in this country and in Ireland.

The Huntington Ancient Order of Hibernians will once again, as is this their custom, march dressed in their distinctive gray morning suit tuxedos. “We take a great deal of pride in putting on the Parade,” said AOH Parade Grand Marshal Dominick Feeney, Jr., whose grandfather was a founding father of the current Huntington AOH. “We work hard to make sure the Saint Patrick’s Day Parade is a wonderful Huntington community event.”

Treasurer, Rich McGrath adds, “many residents mistakenly think the Town sponsors the parade each year, but in truth it’s actually the Hibernians who organize, promote, run and raise the money needed to pay for all the expenses associated with putting on this spectacular parade. 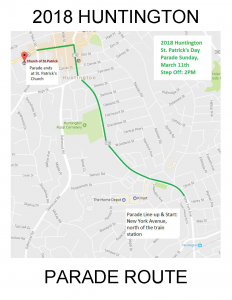 Click on the map to see a larger version