April 6, 2018 9:33 am | Filed under: East Northport,Fire,Heart of the Community,News | Posted by: The Huntingtonian

The East Northport Fire Department responded to a multiple calls for a house fire on Meadow Rue Lane on Friday afternoon, March 30, at about 1:45 p.m. Firefighters arrived to a raging fire on both floors of the home and began an aggressive attack on the blaze. Five trucks and two ambulances from East Northport FD were dispatched under the command of First Assistant Chief Dan Flanagan. The Northport, Greenlawn and Kings Park FD’s assisted at the scene with additional apparatus, and the Dix Hills FD provided standby coverage. About 70 firefighters and EMS personnel were on the scene. The Huntington Town Cyanide Response Team Paramedics also responded to the scene. Two Suffolk County Police officers who were first to arrive on the scene rescued a dog from the house, and were transported with smoke inhalation to Stony Brook University Hospital by East Northport FD ambulance. Additionally, a Northport firefighter suffered a shoulder injury and was transported to Huntington Hospital. The Suffolk Police Arson Squad and Huntington Town Fire Marshal are investigating the cause of the fire. 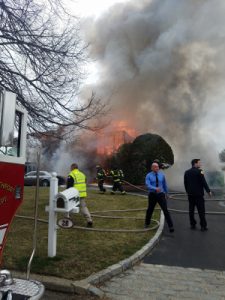 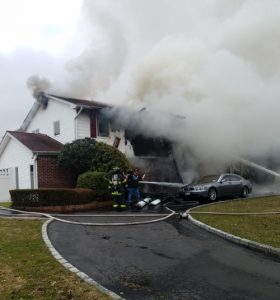 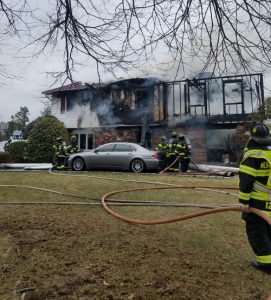 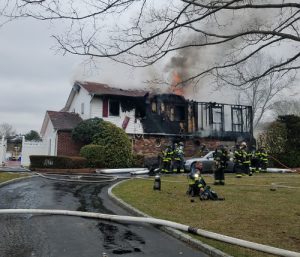