At its July 17, 2018 meeting, the Huntington Town Board entered into a mediation agreement to resolve the LIPA lawsuit. The Town Board also approved tax-saving and revenue-producing measures, beautification projects, a skin cancer prevention initiative, and dedicated a street in the name of a local World War II veteran, among other Town business.

The Town dedicated McKay Road in Huntington Station as SSgt. USAF Michael J. Colamonico Way, after a Huntington resident who served in World War II and was a member of the Huntington Veterans Advisory Board, whose members requested the street be renamed in his honor.

“Michael J. Colamonico served his country in the United States Air Force during World War II, and at the end of a 13-hour bombing run, a German Messerschmidt fighter plane shot down the B-17 bomber on which he was a top turret gunner, over France on December 31st, 1943,” said Supervisor Chad A. Lupinacci, as he presented the resolution, “held prisoner at the infamous Stalag 17 in Austria where he spent 17 months in captivity, and finally liberated on May 3rd, 1945, in Braunau, Germany, Mr. Colamonico dedicated his life to his family and veterans affairs issues as an advocate for active military and veterans.”

“Staff Sgt. Michael J. Colamonico, United States Air Force, was a true American Hero and Huntington is proud to commemorate his memory with a street bearing his name,” said Councilman Ed Smyth, who co-sponsored the resolution with the Supervisor.

“Mike Colamonico was a true American hero. A World War II POW that we are honored to recognize,” said Councilman Mark Cuthbertson.

The Town entered into a non-binding mediation agreement with Marty F. Scheinman, Esq., to end the costly LIPA litigation, a measure sponsored by Councilman Eugene Cook.

“At the July 17, 2018 Town Board meeting, I was proud to sponsor a late starter resolution authorizing the Supervisor to execute a mediation agreement with Marty F. Scheinman, Esq., and authorizing the Supervisor to enter into an agreement with the Northport-East Northport Union Free School District, Long Island Power Authority and National Grid to share the costs of mediation. This resolution is important to the Northport Power Plant litigation as it brings to the table all parties including LIPA and National Grid for non-binding mediation; meaning if a settlement can’t be made that benefits Huntington Taxpayers and the Northport-East Northport School District we can walk away from the table and continue litigation. Every effort needs to be made to ensure the future of Huntington and its school districts,” stated Councilman Eugene Cook. “Marty F. Scheinman has arbitrated over 18,000 disputes throughout the U.S. in various industries including: Power, Utilities, Maritime, Nuclear Energy, and Government Services. Mr. Scheinman has proven himself to be an experienced professional who mediated the largest commercial dispute in the history of NYS Court System, which should benefit us all.”

Supervisor Chad A. Lupinacci, who seconded the resolution, added: “We are exhausting all viable options. Mr. Scheinman is a highly qualified mediator and the Town Attorney agrees that the assistance of a neutral third party may help us resolve this case and put an end to this costly litigation to the benefit of Huntington’s taxpayers. It is non-binding, so we can continue litigation if necessary.”

Marty F. Scheinman, Esq., is a seasoned arbitrator who has handled over 18,000 disputes across the United States in various industries since 1978, including high profile disputes involving celebrities, athletes, and elected officials, including the largest commercial dispute in the history of the New York State Court System.

The Town will share the costs of the mediation with the Northport-East Northport Union-Free School District, the Long Island Power Authority, and National Grid at the rate of $1,150 per hour, plus all out of pocket expenses, as well as a one-time $400 administrative fee.

The Town Board also saved taxpayers approximately $158,000 by refinancing $6.2 million in bonds.

The Town enacted a revenue-producing measure to cover the increased costs of operating the Huntington Sewage Treatment Plant Scavenger Waste Facility. Increasing the fee for the disposal of liquid waste at the facility from $62 to $79 per thousand gallons to cover a 19.11% increase in operating expenses, the Huntington plant remains the lowest-priced high-volume liquid waste disposal facility in the area. The revenues from these fees are the sole source of funding for the facility’s operating budget. Additional revenue from this increase is expected to range from $285,000 annually (assuming a 20% decline in incoming scavenger waste volume) to $321,000 annually (assuming a 10% decline in volume) and up to $357,000 annually (if there is no decline in volume).

In other action, the Town Board:

o   To consider authorizing various actions be taken upon properties designated as blighted.

o   To consider amending Chapter 108 (Film Permits) in the Town Code to amend and clarify insurance requirements, amend fees for the processing of applications and issuance of film permits, and create additional penalties for offenses.

o   To consider the issuance of a Special Use Permit and the execution of a license agreement for the construction of a residential fixed pier and floating dock assembly at 7 Heckscher Drive, Halesite.

*The hearing is scheduled for the September 20 Town Board Meeting, as public hearings for zone changes require 30 days’ notice. At the time of the July 17 Town Board Meeting, the agenda erroneously listed the date for the hearing as August 7, due to a scrivener’s error. The date of September 20, 2018 at 7:00 PM was stated at the workshop by the Town Clerk. The final Agenda has been corrected and the legal notices that are prepared in the Town Clerk’s office are based on the dates provided by the Town Clerk at the workshop and will be published correctly. 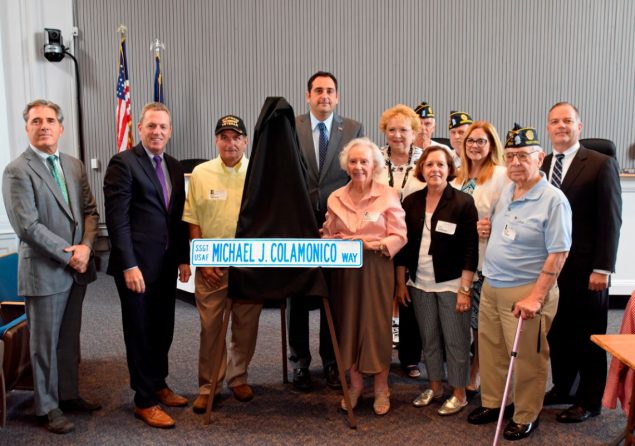