December 7, 2018 4:15 pm | Filed under: Events,Hamlets,History,News,Northport | Posted by: The Huntingtonian Staff

St. Paul’s United Methodist Church, in Northport, is a red-brick late Greek Revival-style church completed in 1873 to the designs of local architect and builder B.T. Robbins.  The congregation’s original, 1852, church is incorporated in the building’s south wing.  In addition to worship, over 2,100 members of the community are served through a wide range of activities.  St. Paul’s received a $35,000 matching grant to help fund a restoration of the church’s belltower. 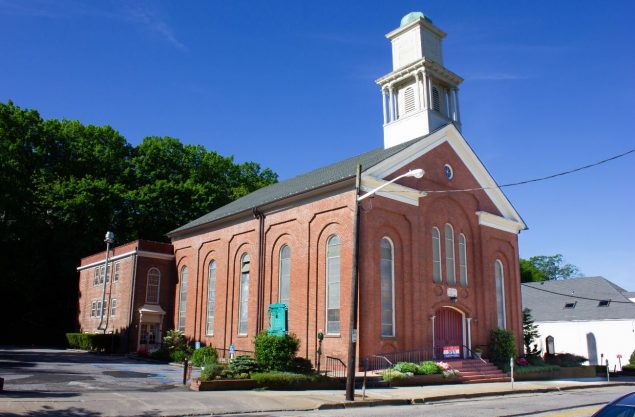 “Long Island’s long history is reflected in its religious architecture,” said Peg Breen, President, The New York Landmarks Conservancy.  “The Conservancy is pleased to be able to help these remarkable buildings continue to serve their congregations and communities.”

Other Long Island grantees are the Bethel A.M.E. Church, in Setauket.  The church was constructed within a 19th-Century community of African-American, Native American, and mixed-race families.  The church received a $3,000 matching grant to assist with a conditions survey of the church’s former parsonage, known as the Eato House, that was constructed in 1917.  The congregation serves over 1,000 members of the community through its affiliation with Bethel-Hobbs Farm, the Setauket Powwow, local schools and a fire department.

The First Congregational Church of Riverhead was constructed in 1836 by builder Timothy Aldrich and later enlarged and modified in the early 20th Century by local architects George H. Skidmore and William Sidney Jones.  The wood-frame church features a four-stage belltower and arched stained-glass windows.  Its congregation reaches over 1,000 people through various community activities.  The Conservancy pledged a $4,000 matching grant to the congregation to help fund window restoration.

The First Presbyterian Church of Southold, located on Main Street, was completed in 1803.  It is surrounded by the town’s historic burial ground.  The wood-frame, Federal-style church incorporates a meetinghouse plan with an octagonal belfry topped by a spire and weathervane.  The congregation serves about 1,100 people a year through community and cultural activities.  The Conservancy pledged a $3,500 matching grant to assist with an assessment of the tower, in advance of a comprehensive restoration.

The United Methodist Church of Patchogue was designed by architect Oscar Teale and completed in 1890.  The red-brick, Romanesque-revival style building has a multi-slope slate roof, and a monumental rose window on its façade.  The congregation serves about 6,000 people through various community activities, including a food pantry, and a Head Start program.  The Conservancy pledged a $20,000 matching grant to assist with roof and masonry restoration.

About The New York Landmarks Conservancy

The New York Landmarks Conservancy has been at the forefront of efforts to preserve, restore, and reuse New York City’s wonderful architectural legacy for over 45 years.  Since its founding, the Conservancy has loaned and granted more than $50 million, which has leveraged more than $1 billion in restoration projects. The Conservancy has also provided countless hours of pro bono technical advice to building owners, both non-profit organizations and individuals.  The Conservancy’s work has saved more than a thousand buildings across the City and State, preserving the character of New York for future generations.

By saving homes, community cultural and religious sites, and preserving neighborhoods, the Conservancy enhances New York’s quality of life.  Hailed as a national model of enlightened and effective preservation, the Conservancy goes beyond the expected and sets new standards for the conservation of treasured landmarks, revitalizing architecturally significant structures and contributing to a “greener” City.  For more information, please visit www.nylandmarks.org.